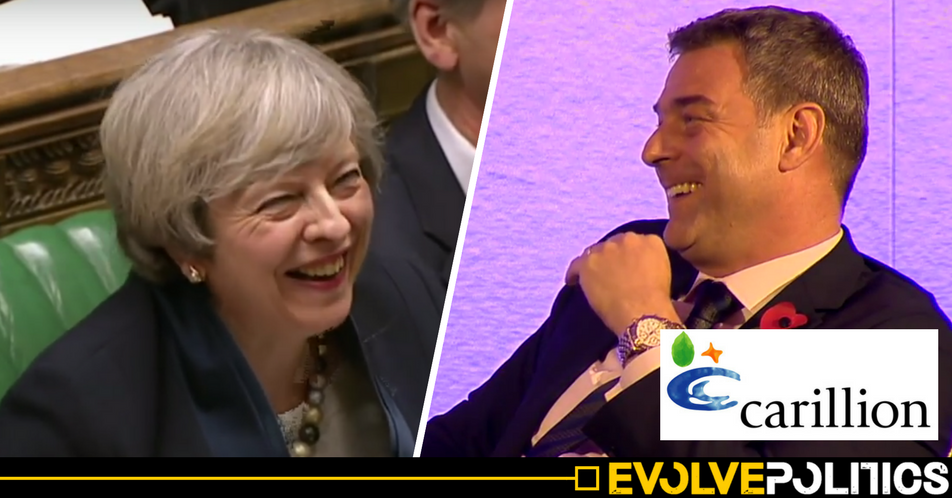 Newly liquidated government contractor Carillion changed their own rules to protect the multi-million pound bonuses paid to bosses from being clawed back by investors and the British taxpayer, should the company enter financial difficulties.

The rule change happened just weeks before the company suffered an ‘accounting crisis’ that wiped £600m off of its share price.

The construction company, who hold a significant amount of outsourced government contracts, changed the wording of their own rules to make it much harder for the government or investors to force bonuses handed to company chiefs to be paid back in circumstances of ‘corporate failure’.

Under the previous rules, Carillion bosses and executives could have been forced to pay back their bonuses should the company enter into financial difficulties – but the rule change meant bosses could only be made to return bonuses in the event that they were found guilty of fraudulent behaviour.

The stark revelation, exposed during an investigation by This Is Money in September, casts huge suspicion on exactly how much foresight the Carillion board had about the impending financial crisis within the company.

Furthermore, the revelation that Carillion seemingly prioritised the personal riches of their top brass rather than the financial viability of the company will also increase public pressure on the government to halt the widescale privatisation and outsourcing of government work.

Carillion, who are contracted by the government to build and maintain a vast array of public buildings such as schools, hospitals, roads and railways, saw their share prices plummet by £600m in July 2017 after projecting massive £845million losses and suspending dividend payouts to shareholders.

Changes to Carillion’s claw-back rules were implemented shortly before the catastrophic losses were announced – protecting an estimated £4m that was paid out to the companies’ CEO Richard Howson and the firm’s ex Finance Chief Richard Adam.

And now, with the firm having entered liquidation after recording massive losses and running up huge debts, the government will be forced to use extra taxpayer’s money to essentially bail out the company to ensure workers are paid and that vital government work is still carried out in lieu of the companies’ financial mismanagement.

The case of Carillion is yet another example of the Tory government nationalising losses whilst privatising profits.

Because of the financial incompetence of this private firm, British taxpayers are now being forced to shell out huge sums of extra money paying for work that should have been completed by Carillion – all whilst their fat cat bosses are able to swan off with their multi-million pound bonuses unaffected.

Furthermore, revelations exposed shortly after the company collapsed indicate that the Conservative government continued handing taxpayer-funded contracts to the company despite obvious warnings that the company was facing impending financial ruin.

The entire Carillion fiasco is yet another damning indictment of the current neoliberal status quo, and a stark reminder that any sensible government would simply run such vital public contracts on a nationalised basis to ensure the work is carried out at a reasonable cost.

However, with public opinion turning sharply against the current neoliberal, pro-corporate greed status quo, the Tories’ privatisation bonanza may well be coming to an end shortly.

And with Jeremy Corbyn’s Labour party waiting in the wings to roll out their platform of mass renationalisation, time may well be running out for shoddy, greed-driven private companies looking to profit from vital public services.