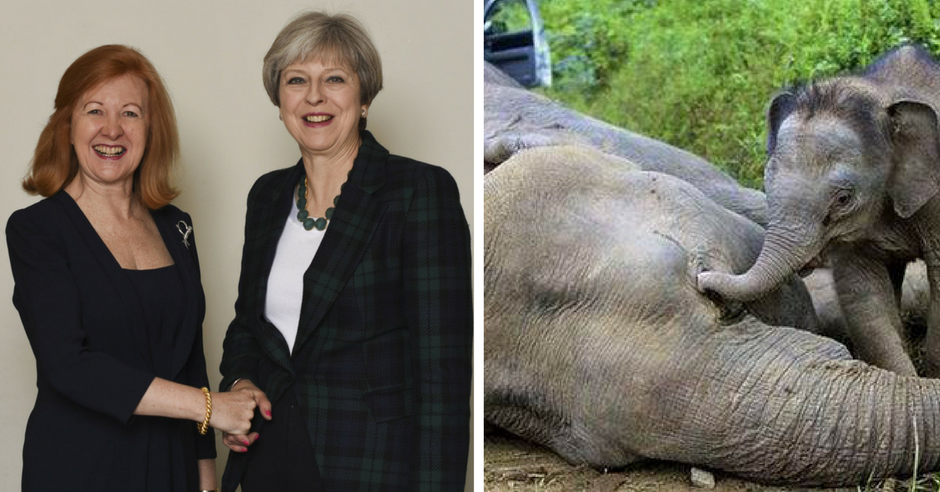 After heavy lobbying from wealthy antiques dealers, Theresa May has sneakily dropped the proposed outright ban on elephant ivory sales from the Tories’ 2017 manifesto.

Following bans in both the US and China, David Cameron had pledged in the 2015 Conservative manifesto to put a complete ban on all ivory trading. However, after huge pressure from rich and powerful antiques dealers, Theresa May has conveniently decided to completely scrap the plans altogether.

The Tories did not decide to implement the ban during the two years after it was announced by David Cameron, and even their staunch supporters in the British press were writing negative pieces about the Tories reticence in pushing through the much-needed legislation.

A much more likely reason (for the Tories dropping the ivory ban) is that they are being swayed by the powerful antiques industry, which fears it will lose millions of pounds if antique ivory sales are stopped, and whose figurehead happens to be Victoria Borwick, Conservative MP for Kensington, and president of the British Antique Dealers’ Association.

The most powerful UK antique traders association is The British Antiques Dealers’ Association, and their President, Lady Victoria Borwick (also the Conservative MP for Kensington) can be seen shaking hands with Theresa May in the image above.

The only mention of the subject in the Conservative Party’s latest 2017 manifesto is a general pledge to work with international organisations to protect endangered species and the marine environment.

Meanwhile, the Labour Party’s 2017 manifesto has specifically pledged to introduce a “total ban on ivory trading”.

An elephant is killed for its ivory every 15 minutes on average, and their numbers have fallen by almost a third in Africa since 2007.

So as well as being in favour of bringing back fox hunting, Theresa May also couldn’t really care about elephants being killed either. Are you seriously going to vote for a woman who bows to lobbyists over a practice as disgusting as elephant poaching?