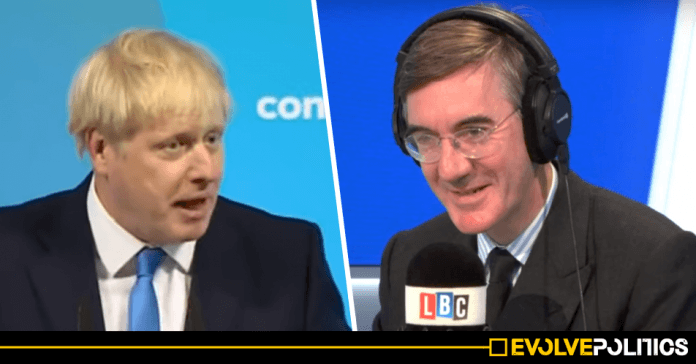 Boris Johnson has continued his hard-right takeover of the Conservative Party after promoting the arch Brexiteer, anti-abortion, anti-LGBT, pro-privatisation Tory MP, Jacob Rees-Mogg, to the role of Leader of the House of Commons.

The Brexiteer will undertake the role of Leader of the House of Commons, responsible for organising the government’s legislation and presenting the Parliamentary schedule to MPs in Parliament.

He replaces Mel Stride in the role, with the previous incumbent having only held the position for just two months after succeeding Andrea Leadsom.

Rees-Mogg will be an extremely controversial Cabinet appointment for many, having been routinely criticised for his ‘outdated’ views on abortion and LGBT rights.

The Tory MP has repeatedly voted against equality for LGBT people, against gay marriage, against laws to promote human rights, and has repeatedly stated his opposition to abortion even in cases of rape.

Rees-Mogg is estimated to have amassed a fortune of around £55m and consistently votes in favour of policies that favour the wealthy – such as against a banker’s bonus tax and against increasing taxes on the rich.

Having served as the MP for North East Somerset since 2010, Rees-Mogg has consistently supported leaving the European Union and is the Chair of the hard-Brexit supporting Tory faction, the European Research Group (ERG).

The Brexiteer failed in his first two attempts to become a Tory MP, having lost after standing in 1997 in Central Fife and also in 2001 in The Wrekin contituencies – finally succeeding on his third attempt in 2010.