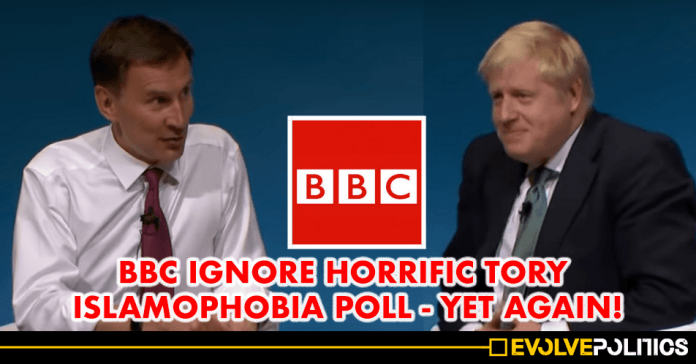 A hugely disturbing new poll has revealed the sheer scale of Islamophobia within the Conservative Party, with a staggering 60% of Tory members polled stating that they believe Islam to be “a threat to Western civilisation” and 54% saying they think Islam is “a threat to the British way of life” – to absolute radio silence from the UK’s public broadcaster, the BBC.

The latest poll, commissioned by Hope Not Hate and conducted by YouGov, follows hot on the heels of a similar poll released two weeks ago which showed similarly worrying and equally widespread racist tendencies within the Tory membership.

In addition to the stark figures released today, last month’s poll showed that:

Despite the results showing a clear prevalence of Islamophobic views amongst the party membership, just 8% of those polled believe that there was a “problem of Islamophobia or racism towards Muslims within the Conservative Party“.

Following the release of today’s poll, both Tory leadership candidates again refused to be drawn into the discusson – with BuzzFeed News Reporter Alex Wickham claiming that it was “close to impossible to get anyone in the Tory party” to talk about the issue.

Predictable silence from both Tory leadership candidates on yet another poll showing a systemic Tory racism problem… it is close to impossible to get anyone in the Tory party to talk about this https://t.co/yWvxrcnnFo

And this Tory tactic of simply ignoring the issue seems to be working for them, with the vast majority of mainstream media outlets – including the BBC – giving the story absolutely no air time whatsoever.

The media’s virtual silence on both shocking polls – in addition to the distinct lack of air-time given to a huge number of shockingly Islamophobic incidents within the Tory membership – comes despite even minor developments within the Labour Party’s own antisemitism crisis being given widespread scrutiny.

Evolve Politics have emailed the BBC to ascertain whether they have any plans to run similar programming regarding the Conservative Party’s own Islamophobia crisis.

“We have reported on allegations of Islamophobia in the Conservative Party on many occasions across our news and political output.”