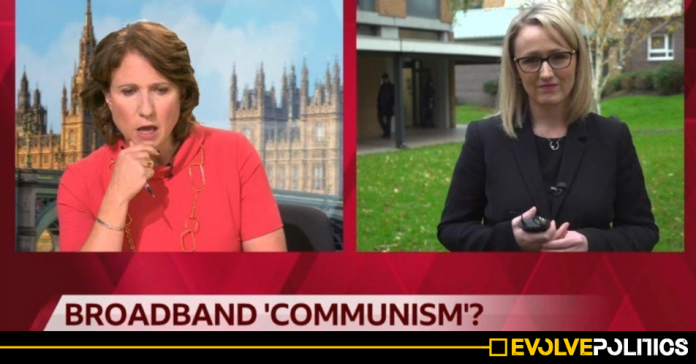 The BBC have been severely criticised on social media after questioning whether the Labour Party’s plans to provide free super-fast internet to every British citizen was a sign of “Broadband ‘Communism‘”.

In an interview about Labour’s plans with the party’s Shadow Business Secretary, Rebecca Long-Bailey, the BBC’s Politics Live show displayed a graphic at the bottom of the screen which posed the question:

The BBC also decided to further publicise the question by posting it to their Twitter:

"No" says Labour's Rebecca Long-Bailey, laughing off a BT description of her party's policy for free high-speed broadband#politicslive https://t.co/hgnK4D7pl1 pic.twitter.com/Zhc3zZ61SJ

The BBC’s choice to use “Communist” framing was immediately highlighted by the Senior Editor of Novara Media, Aaron Bastani, who asked:

“Does the BBC also think that a network of roads free at the point of use is also ‘communism’?”

“Here Aaron goes again pretending he doesn’t understand what quote marks are. We quoted Neil McRae who called Labour plans “broadband communism” in the interview with RLB. She rejected it. Stop pretending these are the views of the BBC when you know they are not.”

BT’s Managing Director, Neil McRae – who has just 925 followers – made the accusation on Twitter, simply stating:

However, many were not convinced with Burley’s response, with one Twitter user responding by stating:

“This is how the BBC have decided to frame it. That sets the tone for the discussion. Neutral framing would be “Labour’s broadband proposal” but this framing implies that it’s probably a bad idea by using a scare-word. They * chose * to quote McRae.”

“The only person who really thinks it’s ‘broadband communism’ is McRae himself – and even then I doubt he really does. Your parroting it in this way is disproportionate. BY your logic we should expect to see the @maitlis interview with Prince Andrew sold as “Andrew paedophile?”

In response to Blacklock’s tweet, Burley hit back saying:

“We didn’t parrot it we put it to RLB alongside a great deal else in a long interview. The fact that someone in BT thinks this makes it worth while asking. And she had time to push back.”

Another Twitter user was equally scathing of the BBC’s choice to frame Labour’s plans as Communism, stating:

“Rob, presumably you went to university and have a degree. Maybe you have more than one. You’ve worked in media for many years. How is that you apparently don’t understand something basic from media studies, the concept of FRAMING, and I do? No higher education, no media work.”

“The framing here is from a screengrab. That’s a distortion. It came in a 10 minute interview.”

However, Burley’s response was immediately attacked:

“The framing here is in the wording of the question (”broadband communism”) and the on-screen text (‘broadband communism?’). That’s obvious and blunt framing. There is no neutrality there, no objectivity. Those were two specific decisions made, to use those descriptions.”

One Twitter user also asked whether the BBC would ever choose to describe the Conservative Party’s immigration policies as “fascism“:

I look forward to your banner on Tory immigration policy reading ,

And the criticism of the BBC’s bizarre decision just kept coming:

Ensuring everyone has access to Broadband in the modern world is not 'Communism.'

You know what is rather Communist though?

A state-owned public TV channel engaging in propaganda by smearing a policy from the opposition which would help millions of people.

Looks like they’ve tried really hard to make an unequivocally good thing seem bad. That’s it, just stick a lil question mark at the end there in case the framing might not seem balanced, that’ll sort it. Up next, ‘the National Health Service — healthcare “communism”?’ pic.twitter.com/imLxlVXYNO

The caption was not quoted that way, just single quotes around the word 'communism'

It's standard tactics from corporate journalists to repeat attacks (the more outlandish the better) from opponents as a cover and reinforcement for their own organisation's narrative.

Unsurprisingly, Rebecca Long-Bailey completely rejected the claim that Labour’s plans were in any way Communist during the interview.