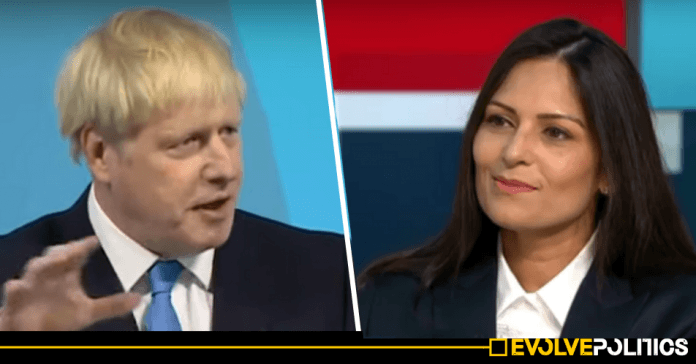 The new Prime Minister Boris Johnson has appointed the disgraced Tory MP Priti Patel – who was forced to resign from the Cabinet just 19 months ago for breaching the Ministerial Code after being exposed holding secret meetings with Israeli government officials – as the new Home Secretary.

Despite being forced out of the Cabinet in disgrace by Theresa May in 2017 over her secret meetings, Patel will now be in charge of Britain’s national security.

During her time as the Secretary of State for International Development, Patel held numerous meetings with Israeli government officials to discuss official business without informing the Foreign Office – in clear breach of the Ministerial Code.

Following the meetings, Patel reportedly recommended that her department give international aid money to controversial field hospitals run by the Israeli army.

Patel’s political opinions are also extremely questionable, having supported reintroducing the death penalty up until 2016.

The new Home Secretary is an arch Brexiteer and considered on the hard right of the party, having consistently advocated for Thatcherite pro-greed economics such as widespread dergulation and the privatisation of public services.

Patel’s attitude towards the LGBTQ+ community will also come into question, having repeatedly voted against the 2013 Same Sex Couples Marriage bill.

In Parliament, Patel has also previously voted in favour of repealing the Human Rights Act, in favour of reducing welfare payments to the terminally ill, the sick and the disabled, and has repeatedly voted for raising tuition fees.

The new Home Secretary, who is an officer for the Conservative Friends of Israel organisation, has also previously described British workers as “lazy.”

Patel had a highly controversial track record even before becoming an MP, having previously lobbied for major tobacco and alcohol firms.

The new Home Secretary was a major backer of Boris Johnson during his successful campaign to become Tory leader.

In addition to Patel’s appointment as Home Secretary, former Tory leadership candidate Sajid Javid has been made Chancellor of the Exchequer, and another failed Tory leadership contender, Dominic Raab, will replace Jeremy Hunt as Foreign Secretary.