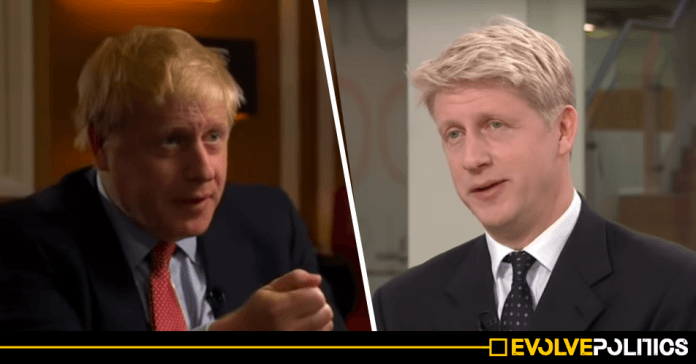 The new Prime Minister Boris Johnson has taken the highly controversial step of handing his own Brother, Jo Johnson, a cushy job in Cabinet as Universities Secretary – an appointment which comes despite the PM’s Brother resigning from Theresa May’s Cabinet in protest at her plans for a hard Brexit in 2018.

Jo Johnson, who served as a Minister in both the Transport and Business Departments under Theresa May before resigning in protest at her hard Brexit plans, will return to his former role as Universities Secretary under his brother’s premiership.

Jo Johnson @JoJohnsonUK has been appointed Minister of State at the Department for Business, Energy and Industrial Strategy @beisgovuk, and the Department for Education @educationgovuk. He will also attend Cabinet. pic.twitter.com/k3FOSt3MWm

The appointment of Jo Johnson will surely come under intense scrutiny, not just over justifiable claims of nepotism, but also for the fact that the Prime Minister’s Brexit plans are significantly harder than the plans he resigned in protest against in 2018.

Jo Johnson was first appointed Universities Secretary by David Cameron in 2015, before becoming a Transport Minister under Theresa May in January 2018.

However, Mr Johnson resigned after less than a year in his post, stating that Mrs May’s plans for a hard Brexit had left the UK “on the brink of the greatest crisis” since WWII and stating his desire for a second referendum with the option to Remain.

The Prime Minister’s Brother subsequently came out in favour of the People’s Vote campaign.

However, Jo Johnson’s principles on a second referendum appear to have deserted him after accepting a job from his brother.

Boris Johnson has explicitly stated that, if a deal can be agreed in Parliament, the UK will leave the EU on October 31st without a deal – something his brother has previously said would “inflict untold damage on our nation“.