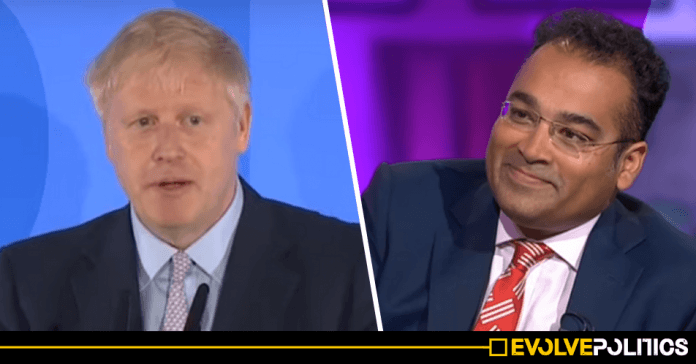 The front runner to be the next Conservative Party leader and Prime Minister, Boris Johnson, has officially chickened out of participating in Channel Four’s live Tory leadership debate on Sunday, according to sources within his campaign team.

According to his team, they have made the decision not to participate as they are worried about “mass blue-on-blue attacks, the structure of the debate and hostile briefings made by the Channel 4 team“.

Confirmed: @BorisJohnson will *not* be participating in the Channel 4 Tory leadership debate this Sunday.

Sources on his campaign said they were worried about “a mass blue-on-blue attacks, the structure of the debate and hostile briefings made by the Channel 4 team.”

Channel Four have already indicated that, should Boris Johnson indeed refuse to participate in Sunday’s live debate, they will effectively ’empty chair’ him by leaving a lectern with his name on it present and visible throughout the show.

The decision comes despite Mr Johnson unequivocally backing leadership debates just 9 months ago, stating in an interview with Sky News that “The way for politicians to allay their anxiety about leadership debates is to have as many of them as possible“:

"My feeling is that they are essential and the public does need to see interchange between their potential leaders" – Former foreign secretary Boris Johnson has backed Sky News' #MakeDebatesHappen campaign.

Johnson’s decision not to engage in the debate also strongly mirrors the outgoing Prime Minister Theresa May’s disastrous decision not to participate in debates during the 2017 General Election.

Following her dreadful election campaign which resulted in her losing the Tories their parliamentary majority, polling showed that her decision to chicken out of the debates had a large negative influence on how the public percieved her.

It is believed that Johnson’s team have advised him not to participate in the Channel Four debate in order to minimise the risk of him producing a gaffe that might negatively effect his current status as overwhelming favourite to win the second round of voting.

Whilst, Johnson has already confirmed that he will take part in a live debate on the BBC, this programme will take place after the second round of voting, meaning it will have no effect on his path to the final two candidates and the crucial Tory membership vote.

The other five remaining Tory leadership candidates have all signed an open letter committing themselves to take part in all televised debates.

Mr Johnson remains the only candidate not to sign the letter.