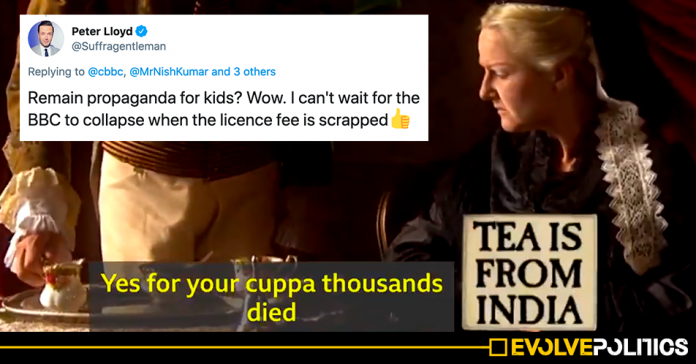 Right-wingers are always extremely quick to brand people as “snowflakes” for getting offended by things they perceive to be insignificant – but Brexiteers and Tory supporters across the land are genuinely getting their Union Jack knickers in a twist at a kids’ TV show for teaching our children things such as the fact that tea isn’t actually British.

Yesterday was the final day before Brexit – and to mark it, the BBC’s dedicated childrens’ channel, CBBC, posted a tweet containing a short clip from a 2009 episode of Horrible Histories, accompanied by a newly recorded introduction from comedian Nish Kumar.

The clip, amongst other things, contains the startling facts that a lot of Britain’s tea originates from India, and some of the sugar that many people put in it comes from the Carribbean.

The segment also mentions the fact that Britain was active in the slave trade, that it started wars in order to steal the resources of other countries, and that the Queen is actually of foreign descent.

The clip essentially teaches kids that many of the things one might simply assume were made in Britain are not, and that some actually have particularly horrible histories – hence the title of the show.

However, many Brexiteers were furious at the BBC for teaching kids the truth about Britain – with some genuinely branding the clip as ‘BBC Remain propaganda’ and another literally, and quite hilariously, calling it “ANTI-BRITISH RACISM”:

Clear anti-Brexit hysteria from the BBC. As for Nish Kumar… https://t.co/V1xvJuWc1o

THIS ANTI-BRITISH RACISM IS OUTRAGEOUS OF THE BBC

A racist, anti-British film, paid for by you and me, and broadcast to our children on CBBC.

If anyone was in any doubt that the "British" broadcasting company absolutely detest Britain, British history and the British people they can watch this.

Fronted by the very nasty Nish Kumar and aimed at our children and grandchildren, this should leave no one in any doubt.

Vile and mean spirited, not to mention wrong information for kids. Something that may be shown on Iranian TV, but not the BBC.

However, some found it pretty ironic that the same right-wingers who are forever labelling those who call out *insignificant* things like rampant racism and creeping fascism as “snowflakes” were genuinely getting triggered at a kids’ TV show for literally stating certifiable facts:

Weird that many Brexit voters have such a profound and relentless problem with Nish Kumar, David Lammy, Stormzy, Diane Abbot, Sadiq Khan and Meghan Markle. I wonder what that could be about. It’s quite mysterious.

CBBC reused a Horrible Histories sketch from 10 years ago with a very scant introduction from Nish Kumar and now hundreds of yer das in the replies are accusing them of Remain propaganda. Very cool and normal https://t.co/xQXaIA0zcZ

People are upset that CBBC played a sketch pointing out certain things British people like, came about due the bloody wars and racism.

Be racist towards Nish Kumar because he introduced the sketch.

Talk about reinforcing a point.

OMG, a film by Nish Kumar, with actual facts in it?? OUTRAGEOUS!! Why can't they keep lying to the kids, deny British colonial "past" and its involvement in slavery & wars?? Disgraceful, I tell you!!
You shouldn't be called The Core but something beginning by C & ending by unt.. https://t.co/9lZAgzyV9P