Yesterday some of the most respected members of our judiciary donned their pantomime wigs, sat in the high court, and passed judgement on what will surely become a landmark case in legal history.

Businesswoman Gina Miller’s legal challenge to Theresa May’s virtually unprecedented claim to absolute prerogative over Article 50 was brought not to attempt derailing Brexit.  Neither was it intended to have any impact on the final deal we eventually strike (if we ever do).

No one really expects the vote to overturn the referendum result.  Even if that is the most sensible course of action for the country right now, it’s unlikely that MPs would risk the damage that could be done to their own position and to what little remains of our self-esteem as a country.

No, this action was brought to ensure that the whole of Westminster plays a part in any action of this magnitude – and quite rightly so.

Theresa May’s preference, as with most things since she became PM, is apparently to dispense with the niceties of parliamentary process and overturn a long established bill – the one that took us into Europe in the first place – entirely on her own say so.

Ms Miller’s objection to our PM becoming a de facto dictator in this instance was supported by nearly half the country – people now routinely dismissed as ‘remoaners’ by an increasingly shrill Brexit brigade – as well as Brexit-backing business-people, such as hairdresser Deir Dos Santos.

This wasn’t a partisan case, the aim was simply to see our, albeit unwritten, constitution observed and the sovereignty of Parliament upheld.  Both of which were familiar rallying cries from the Leave campaign during the referendum, although you’d scarcely know it now.

The judgement handed down was based purely on law and has no discernible impact on the path of Brexit (whatever that may finally turn out to be).  It simply establishes the quite reasonable assertion that the Parliament that took us into Europe back in the heady days of glam rock Britain should be the same democratically elected body that has the final say in taking us out.  To most people, truly supportive of our democracy and of transparent government, that would seem a perfectly reasonable expectation.

Yet we’ve seen the Brexit batsh*t-o-meter bending the needle as the right wing media, UKIP and assorted nutters line up to call for everything from civil unrest to heads on spikes.

With depressing inevitability, Gina Miller herself has of course been subject to death threats, whilst the judges in the case are reported to be under armed police guard.  In their characteristic clickbait style, The Daily Mail branded them as ‘enemies of the people’, while The Sun asked ‘EU do you think you are?’.  It seems that even when it comes to constitutional indigence, The Sun just can’t resist a really crap pun.

An army of right wing politicians lined up on Twitter to pile on the dog whistle of excoriation with Jack Lopresti MP, amongst others, accusing “unelected judges” of “thwarting the will of the people”.  On Question Time last night we saw crimson faced Brexiteers, forehead veins sprouting like fleshy fireworks, making similarly specious claims, neatly demonstrating just how ill-informed ‘the people’, and many MPs, are.

Wannabe UKIP leader, Suzanne Evans, never one to miss the chance to bang the self-righteous right wing drum, called for the judges to be sacked. “How dare these activist judges attempt to overturn our will? It’s a power grab & undermines democracy”, she cried in a fit of unhinged contradiction presumably intended to whip up fervour for her ill-favoured campaign.

Not wanting to miss out on the fun, we naturally had a quote from Old Swivel Eyes himself, Nigel in-out in-out Farage, warning us of the anger that will be ‘unleashed’ if Parliament doesn’t do as they’re told by him and his cohorts.  Reminding us that he waits, Arthurian-like, to return should the government backslide on Brexit.  Although in his case I think the reference is more Arthur Mullard than Pendragon.  Younger folks may need to Google that one.

Finally – we have the woefully misnamed British Democratic Party exploding in an orgasm of self-importance on their website.  Presumably jizzing all over their keyboards as they typed, they breathlessly announced ‘Operation Beacon’ – something they say they’ve been planning for months.  It’s not like they have much else to do I suppose.

Beneath a picture that looks like an out-take from The Wicker Man, they lay out their heroic plan to deal with a decision made by a high court “infested with remain sympathising judges”.

In an irony that must surely be visible from Neptune, they explain how they will “ignore the sovereignty of Parliament and revert to the only law that matters: Article 61 of Magna Carta which has never been repealed, it is our true sovereign law”.  For the uninitiated, this refers to the right to lawful rebellion.

Leaving aside the usual ignorance of the real purpose of Magna Carta, a document that had precious little to do with the rights of the common people, yet eagerly quoted by people who confuse it with a bill of rights, this amounts to a call to insurrection.  In the case of the Democratic Party’s big scary plan, this seems to translate into a series of mass protests outside Parliament.  Although we’d need to bear in mind that ‘mass’ in terms of the BDP is probably going to be a couple of blokes, a dog and a cardboard cut-out of Oswald Mosely.

An odd venue for their uprising, however, considering they appear to be objecting to MPs having any part in the process of government.  Perhaps, given the time of year, they’re hoping to inspire another gunpowder plot.  Judging by their penchant for unintended irony, someone will probably bring a Roman Candle.

Of course, most of this is simply tabloids and extremists grabbing the chance to grandstand and whip up the confused ire of the same group of people they all lied to, misled and manipulated before the referendum vote.  It’s low hanging fruit and they’re not going to let the truth of the matter get in the way of selling a few more papers, or grabbing more support for their one dimensional view of the world.

MPs baying for the blood of the judiciary are cynically pandering to a pitchfork wielding crowd, whining that the process of leaving the EU hasn’t turned out to be quite as simple and instantly gratifying as a vote on Strictly.  If anything, that makes them unfit for office themselves.

But there’s also a more chilling element on social media, with one Tweeter calling on the army to overthrow the Government and another to assassinate an MP.  One particularly delightful individual has tried setting the hashtag #HardBrexitOrDeath trending.  Considering the events in Batley and Spen a few short months ago, that is truly sickening. 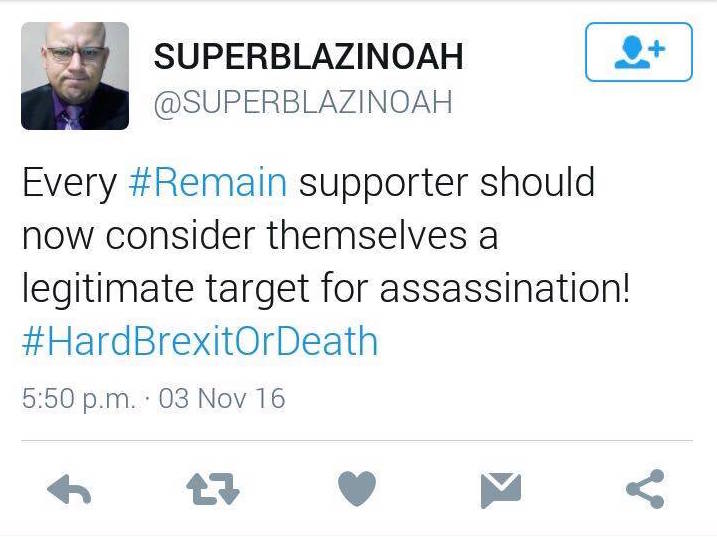 Amidst inaction, pitiful leadership and deliberate division from the Government, we’re seeing the Brexit argument descend into mob rule.  With Remembrance Sunday almost upon us, it seems Theresa May would rather defend a footballer’s right to wear a poppy than uphold the very rights that the people those flowers commemorate died to defend.

Whatever her motivations, if she’s serious about meeting her timetable for triggering Article 50, this ruling means she’s going to have to step outside of the comfortable soundbites and pre-scripted put downs and afford the House of Commons the respect it deserves.  To that end, she should call a debate now rather than prolong the agony with yet another legal challenge.  Above all, she needs to start acting like a leader for everyone, rather than just for the howling hordes.