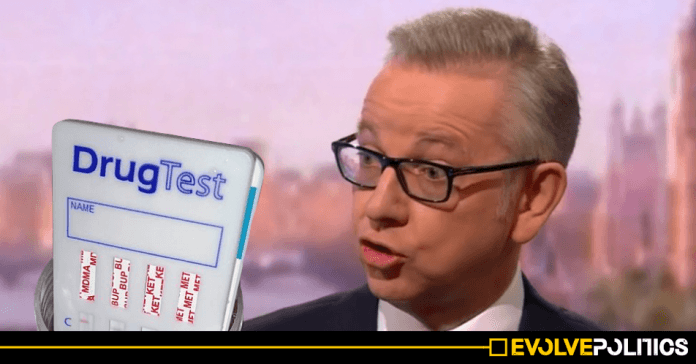 A campaign to enforce mandatory drug tests on members of Parliament has gathered significant momentum after a sitting Labour MP and a drugs testing company both confirmed they would be extremely interested in pushing the idea forward.

Following his tweets on the idea gaining significant traction, a sitting Labour MP, Debbie Abrahams, confirmed to him that she would be more than happy to undergo a mandatory drug tests.

And just today, drugs testing company Odilia Clark tweeted a response to Tiffin confirming that they would be “really keen to help out with the drug testing of MPs“:

Well we have s company willing to drug test all MPs for the #TakeTheTest campaign.

Please contact your local MP to ask them to participate.#PMQs https://t.co/F2VDq16NAJ

Speaking about the reasoning and ethicacy behind his idea to force MPs to take mandatory drugs tests, Tiffin told Evolve Politics:

“With revelations about the Tory leadership contenders having previously taken drugs it is important that MPs take the lead.

“The armed forces they oversee are subject to Compulsory Drug Testing (CDT) sometimes several times a year. As are many other occupations.”

“The public need to have confidence that when deciding our laws, MPs are themselves fit to serve. Otherwise it’s just another case of one rule for them and another for us.”

Tiffin also confirmed that Labour MP Debbie Abrahams would be lobbying her fellow MPs to push the idea forward.

If enough support can be gained, it is understood that a Private Member’s Bill proposing the idea could be put before MPs.

Any MPs voting against such a bill would, inevitably, attract significant criticism and suspicion – because, as the Conservative Party’s own motto for their highly controversial Snooper’s Charter legislation states: