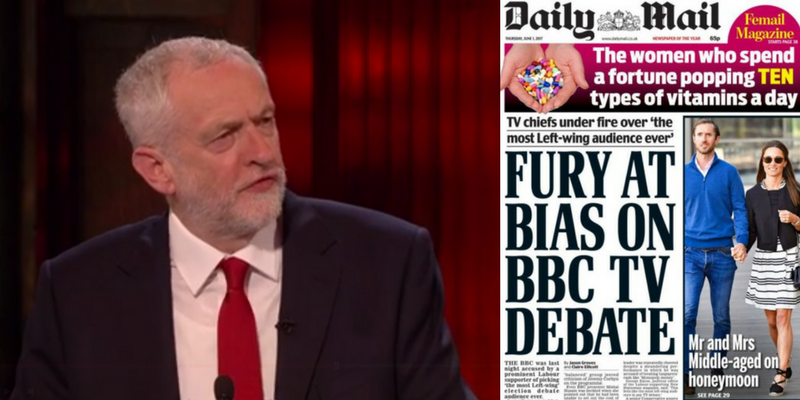 Last night’s live BBC debate was a somewhat chaotic affair. The BBC’s moderator and presenter Mishal Hussein had quite a task imposing order on the candidates. It was at times a heated affair but, overall, definitely worth watching.

According to the Daily Mail and Tory bigwigs it was also a rampantly biased one.

They complained bitterly that the audience was saturated with Corbynistas and that criticism of Corbyn was met with jeers from the audience. They complained that it was an exercise in rampant BBC bias supporting their favourite bogeymen; the ‘hard left.’

They lost no time making their displeasure known. Boris Johnson described it as:

Seven people speaking to probably the most left-wing studio audience the BBC has ever brought together.

It’s quite clear there was an anti-Tory bias in the audience.’

Nicolas Soames was equally forthright, referring to a:

Even George Eaton, editor of the union-busting New Statesman, remarked ‘This feels like most left-wing audience in any election debate’ and, to be fair, there were also complaints from viewers.

Further criticism came from Philip Davies, professional filibuster and pronounced anti-feminist. As Davies put it, unusually concisely for once:

You only have to watch Question Time to realise that the BBC’s idea of an impartial audience is 80% Labour supporters.

There’s one small problem with these accusations, however. The BBC didn’t actually choose the audience. They instead employed polling company ComRes to recruit the audience, making it somewhat inaccurate at best to accuse the Beeb of actively stacking the event with leftists.

The BBC has attracted a great deal of criticism for its alleged pro-Tory bias, most notably accusations against Andrew Neil, Andrew Marr and especially Laura Kuenssberg, but we didn’t see Tory bigwigs coming out in force then. Which raises a question;

If the audience had been stacked with pro-Tory viewers, would they have had the integrity to say so?

Today begins the last week of a remarkable campaign  that has seen Jeremy Corbyn’s poll ratings soar despite relentless negative mainstream media coverage and infighting from the right-wing of his own party.

Even more remarkable is Theresa May blowing a 24-point poll majority, despite the media being as compliant as they could be and against a backdrop of Labour in-fighting. She’s gone from ‘strong and stable’ to as ‘weak and wobbly’ as she could be, sending Amber Rudd in her place despite Rudd having lost her father just 48 hours before. Rudd’s performance wasn’t astounding by normal standards but, to be fair, she did well to manage at all under the circumstances.

The last week’s campaigning may well be its most bitter and personal. The tone of some campaigning has been unpleasant from the start. It will probably worsen as Labour’s popularity continues rising at Tory expense. Tory backers, such as media barons like Rupert Murdoch, seem increasingly frightened that, despite everything, Corbyn might manage one of the greatest electoral upsets ever.

In short, the more personal and vindictive their attacks become, the greater their desperation to avoid a Labour government. With the increasing rise in Labour’s approval, the 1% have also become weak and wobbly at the prospect of paying a little more tax under Corbyn.