Peter Cuthbertson, the Tory candidate for Darlington, has come under significant pressure to stand down as evidence of his extremist views on rape, abortion and h*mosexuality have come to light.

Mr Cuthbertson wrote in his personal blog that a woman’s “promiscuity” is relevant in determining the likelihood of her having consented to sex in alleged cases of rape, as well as expressing many other extreme views about other equally serious topics.

Good response today in #Darlington campaigning for #GE2017 with Peter Cuthbertson – solid support for #TheresaMay from all sides pic.twitter.com/5RkZlAx1AQ

Cuthbertson’s blog posts have led to calls for him to resign, but so far he has refused.

In one post the Conservative candidate expressed his admiration for a:

courageous priest jailed in Sweden for preaching against h*mosexuality

The potential Tory MP Cuthbertson also wrote several blogs about rape claims, including one arguing against proposals to make men prove they obtained consent before sex and legal restrictions regarding bringing up a woman’s sexual history in court.

New laws proposed by the government to cash in on public sympathy over the Ulrika Jonsson rape case will now require that men accused of date rape prove they ensured the woman in question gave her consent. In other words, any man who cannot prove his innocence will be convicted.

Worse, defendants will now be restricted in bringing up the woman’s sexual history. Of course, it is relevant how promiscuous a woman is in determining how likely it was she consented

Cuthbertson also claimed that a:

a woman of low morals is more likely to consent to sex, and to lie

all the sympathy in the world should be extended to women who have been raped, but men who are falsely accused of this crime are equally the victims here 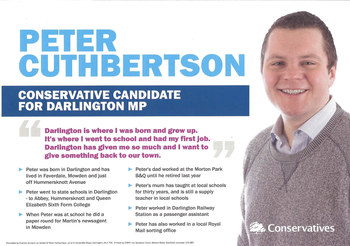 Another of Cuthbertson’s blog posts give his extreme views on the problem of:

In a piece about STDs and young people he wrote:

I can say with absolute certainty that 99% of the girls in question will know exactly how to use various contraceptives. The reason they don’t on the whole seem to bother is the same as the reason they mate like animals in the first place: no one hopes for or demands anything better from them than that they conform to the most base instincts for instant gratification, whatever the morality of their actions and whatever the consequences.

The opinionated posts continued in a separate article in which Cuthbertson suggested that the answer to societies moral ills was to have more guns:

The more influence morality has over a man’s conduct, the less need there is for the state to control it. Crime can be reduced by many police, many laws, tougher sentences and more guns,

In yet another controversial post, Cuthbertson also insinuates that nurses, teachers, and even pensioners are greedy.

In the same post, he expressed support for the death penalty and voiced opinions against abortion, suggesting that people who do not treat fetuses as unique human lives are:

Peter Cuthbertson clearly has no place in parliament and should stand down immediately. Theresa May should be far more careful about picking who should be in her supposed team,