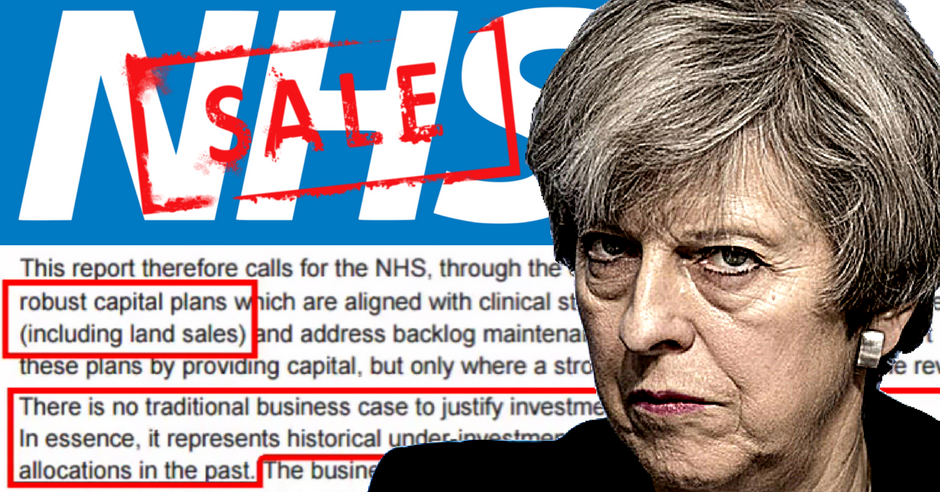 Recent years have seen increasing speculation that the Tories aim to privatise healthcare by the back door, running the NHS into the ground to sell it off, citing private ownership as the only remaining option. This hasn’t been confirmed, but it would be a national scandal if it was.

Whilst the Tories’ ambitions of privatisation are hard to prove, Theresa May has in fact given us a huge clue as to how her government would finance ‘improvements’ to NHS services, and they’re absolutely outrageous.

In her interview with Andrew Neil last week, May declared her support for the recent Naylor Report, a report which (if anyone in the media had bothered to actually read it) makes extremely disturbing reading with regards the future of the NHS under Tory rule.

The Naylor Report covers the future of the NHS, including NHS assets like buildings and land. When Primary Care Trusts and Strategic Health Authorities were disbanded in 2012 they were replaced by commissioning consortia. All NHS properties not handed to the consortia were transferred to a company called ‘NHS Property Services Ltd’. Not sold, just signed over, for free.

The Naylor Report, supported by May, makes some alarming recommendations for not only selling off of NHS property assets, but offering a ‘2 for 1’ deal where the purchase price is matched with an equal amount of taxpayers’ money from the Treasury. An NHS Trust could be sold far cheaper than the going rate, knowing the loss would be covered by the taxpayer. If a developer offers a million pounds for land and property worth two million, the loss doesn’t hurt the seller because the taxpayer (you and me) will be made to stump up the difference.

HMT (Her Majesty’s Treasury) should provide additional funds to incentivise land disposals through a ‘2 for 1’ offer in which public funds match disposal receipts.

The below video from Chris Holden explains exactly why these are extremely worrying developments for the future of our nationalised health system.

The current property portfolio held by NHS Property Services is vast. The Naylor Report recommends selling as much as possible, as quickly as possible. With the ‘2 for 1’ offer in mind, that recommendation amounts to Theresa May supporting a fire sale. Simply asset-strip the NHS, sell it piecemeal to whichever wealthy interests want to buy it and cover the inevitable financial losses with our money.

The Naylor Report also recommends actively accelerating the process, stripping NHS land and property assets as quickly as possible. Or, to put it more bluntly, sell it all off before too many people get wind of the idea. Then there’s the small matter of what to do with NHS Trusts that have assets, but don’t actually want to sell them off at bargain discounts.

The report has some pretty specific recommendations on that point as well.

If provider plans are not embedded within STP plans, which maximise disposals, address backlog maintenance and deliver the 5FYV, they will not be eligible to access public capital funding.

Which in plain English means that if a hospital or NHS Trust doesn’t co-operate with these plans to have their assets sold on the cheap, they won’t be eligible for funds to buy new essential equipment such as beds or monitoring equipment.

In short, May admits supporting a report that recommends forcibly asset-stripping the NHS (assets which our tax money has already paid for), selling those assets at below market prices to wealthy business interests, and then spending our tax money again to cover the inevitable financial losses of this fire sale.