The son of the owner of the van hire company whose van was used in the terrorist attack against Muslims at Finsbury Park has been slammed after posting a Facebook comment on the incident saying ‘it’s a shame they don’t hire out tanks’, according to the Metro.

The alleged attacker, Darren Osborne, used Pontyclun Van Hire in South Wales to hire the van he used to carry out the despicable attack yesterday.

“He wasn’t involved only the van they just said they are deeply sorry, glad I’m not running the Van Hire the police wouldn’t like what my answer would be.”

“It’s my Dad’s company I don’t get involved, it’s a shame they don’t hire out a stream rollers or tanks could have done a tidy job then.” 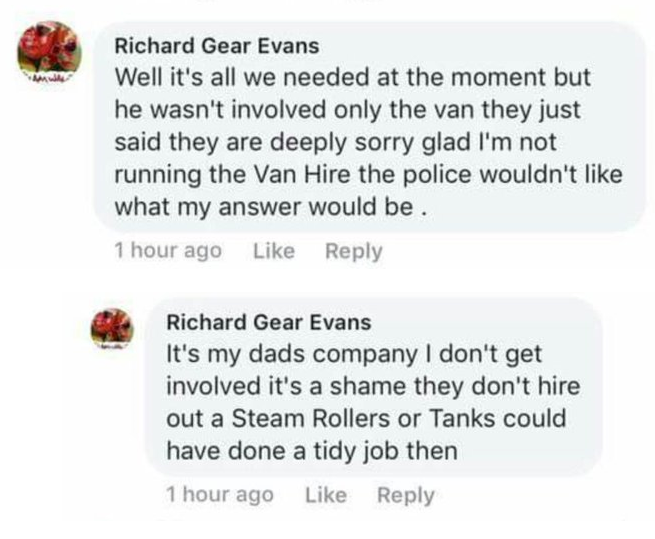 One man was killed and eight others critically injured after the anti-Muslim attack in Finsbury Park yesterday. It has been claimed that the alleged attacker, Darren Osborne, shouted “I’m going to kill all Muslims – I did my bit” before mounting the pavement and driving into the crowd. This is not dissimilar to the tactic used by radical Islamists at the London Bridge terror attack.

Evans is not involved with his father’s business, and currently works for Eddie Stobart Logistics, who told Metro.co.uk:

“These remarks in no way reflect the view of Eddie Stobart Logistics and we have taken immediate action.”

Evans’ disgusting remarks have been slammed as an example of how far-right sentiment is slowly radicalising hearts and minds across the UK. Sadly, this comes as no surprise to those who have seen the vile comments made over the last few years by the likes of Katie Hopkins and Tommy Robinson. For Evans to not only show absolutely zero empathy for the victims of this terrible tragedy, but seemingly advocate even harsher attackers shows how poisonous British political discourse is becoming. It is becoming increasingly clear each day that like our elders did before us, we must stand up against the rising tide of hatred, division and oppression.