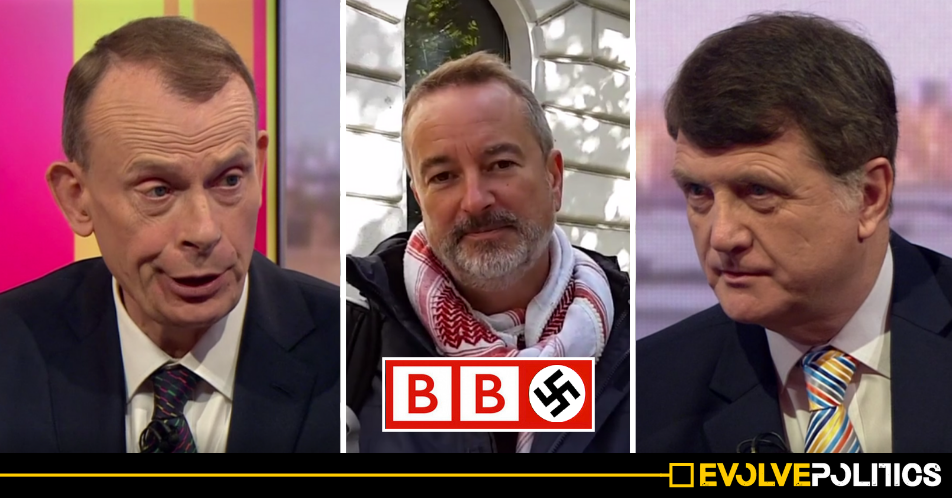 A long-serving ex-BBC News Reporter has slammed his former employer for “enabling fascism” and, in a stinging complaint letter to the corporation’s Director General, says that he is now ashamed of the UK’s public broadcaster as he believes it “facilitates fascism and transmits its propaganda uncritically and unchallenged“.

Last week, whilst covering the launch of Nigel Farage’s newest political project, The Brexit Party, the BBC decided to uncritically repeat Farage’s deeply disturbing statement that MP’s deserve “nothing less” than having “the fear of God put into them” – a tweet which, unsurprisingly, came in for significant criticism.

And yesterday, the BBC invited the leader of UKIP, Gerard Batten – who claims Islam is a “death cult“, has appointed a convicted criminal, Tommy Robinson, as an advisor, and has moved the party to the extreme far-right – on to their flagship Sunday morning political programme, the Andrew Marr show.

Following the BBC’s coverage, the veteran former BBC War Correspondent, Patrick Howse, wrote on Twitter that he was now “ashamed” of his former employer, stating:

“I worked for the BBC for 25 years often in dangerous places. I’m now ashamed of it. I’ve written to BBC Director General Tony Hall. My focus is on the Farage coverage last week, but it was all confirmed yesterday with the way Marr interviewed @DavidLammy . (Thread):”

“The way this works now is 1. Jacob Rees-Mogg quotes a German AfD fascist (a party that advocates shooting refugees). 2. JRM’s supporters get the idea it’s OK to be a fascist (as intended). 3. After row ensues (days later), JRM “apologises”, an apology taken seriously by nobody.”

“4. Lammy calls it out, and gets interrupted by Marr saying JRM has “made it very clear he doesn’t endorse the AfD”. 5. Lammy gets flak for calling out the ERG’s links to the far right. Well, I stand in solidarity with @DavidLammy.”

The former BBC reporter also went on to state that “The BBC is enabling fascists“, before adding a photo of a letter he had sent to the BBC’s Director General, Lord Hall.

“I worked for the BBC for 25 years, starting as a trainee in 1989 and finally leaving in 2015. I worked across news, in a variety of roles, mainly for Newsgathering. Between 2004 and 2009 I spent more than a year (in month-long tours of duty) in Baghdad as bureau chief there. In the course of my career I was shot at, punched, kicked, tear-gassed, spat at, insulted, and pelted with stones, bottles and petrol bombs. I worked long hours at some personal risk and at some personal cost. But I believed passionately in what the BBC was doing, and I was proud to work for the corporation.

“Whilst BBC journalists working around the world in terribly difficult circumstances still meet the ideals, I have to say – with an extremely heavy heart – that I have changed my view of the BBC. I won’t go into all the detail of your dismal coverage of Brexit because I’ve written about that elsewhere. I’d like to tell you though, that even when I have been disappointed by coverage, and questioned it, I still somehow managed to believe that the BBC was trying to do the right thing, and that it was ultimately a force for good.

“That finally changed with the coverage of the launch of Nigel Farage’s new party, and in particular his speech in which he said he wanted “to put the fear of God” into MPs.

“If these words had come from the lips of an IS spokesman, they would have been (rightly) condemned. But Mr Farage was not only allowed a platform fo make these remarks, he was not confronted with their implications, and the audience was not reminded of the context. That context is, of course, that Jo Cox was murdered by a nazi less than three years ago, and just a few days ago a threat against the life of another MP, Rosie Cooper, was dealt with by the courts.

“At best, Mr Farage’s comments were criminally irresponsible; at worst, they were an incitement to political violence, and democracies don’t work if elected representatives live in fear. I’m astonished that it seems you need to be reminded of this. The coverage of this speech has actually made me see things in a different light. I’m no longer proud to have worked for the BBC – I’m ashamed to be associated in any way with an organisation that facilitates fascism and transmits its propaganda uncritically and without challenge.

The BBC is enabling fascists and I'm ashamed of it. Here's my letter to Lord Hall. pic.twitter.com/ITUfG94dc4

The BBC is yet to respond to Howse’s complaint.