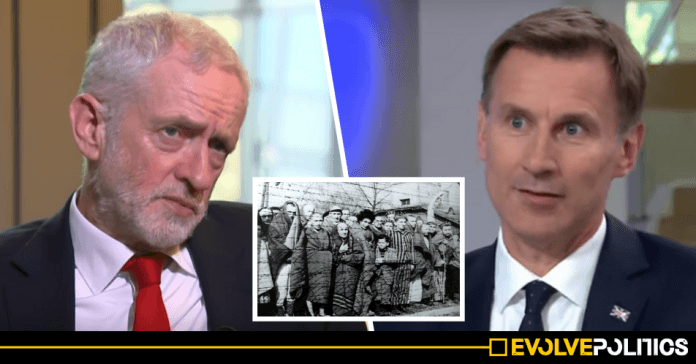 The Foreign Secretary and Tory leadership candidate, Jeremy Hunt, has been severely criticised for “weaponising antisemitism in the most vile way possible” after attempting to link the Labour leader, Jeremy Corbyn, to Hitler’s concentration camps and the genocide of six million Jews during the Holocaust.

Speaking in an exclusive interview with Jewish News, Hunt used a recent visit he made to the infamous former Nazi concentration camp, Auschwitz, to attack the Labour leader, stating:

“When I went to Auschwitz I rather complacently said to myself, ‘thank goodness we don’t have to worry about that kind of thing happening in the UK’ and now I find myself faced with the leader of the Labour Party who has opened the door to antisemitism in a way that is truly frightening.”

Hunt’s attempt to link Corbyn with Hitler’s death camps have come in for significant criticism, with a petition calling on Hunt to apologise having already been signed by over 10,000 people.

The petition goes on to claim that Hunt’s comments were “cynically fanning the flames of fear” and were designed to imply Corbyn could be “the next Hitler“:

“By implying Corbyn is the next Hitler, he is deliberately and cynically fanning the flames of fear about a Corbyn led Labour government amongst Jewish people to enhance his chances of winning a General Election. It is notable that he shows no concern over the fact his opponent in the Tory leadership contest is an Islamophobic, racist, but that’s because he’s a fellow Tory.”

“the idea that someone would visit Auschwitz and use it as a means to attack a leader of a mainstream political party in the UK is utterly insane.”

the idea that someone would visit Auschwitz and use it as a means to attack a leader of a mainstream political party in the UK is utterly insane.

Whilst left-wing political blogger, Another Angry Voice, claimed that Hunt’s attemt to dredge up “all of that unimaginable human suffering purely for [his] political advantage” was “despicable“.

Using Auschwitz to score cheap political points has to be one of the most despicable things I've ever seen, even from a Tory.

Dredging up all of that unimaginable human suffering purely for your own political advantage.

Despite Hunt’s comments being widely condemned, not a single mainstream media outlet has, as yet, reported on the outrage and disgust they have caused.

.@Jeremy_Hunt: "When I went to Auschwitz I rather nonchalantly said to myself, ‘this historic crime against humanity will be quite useful for advancing my career and the electoral prospects of my party'." pic.twitter.com/cqJkmSVZ3e

Jeremy Hunt went to Auschwitz. When he came back, he was so humbled by the experience he immediately used it as campaigning material to insult his political opponents. Because that's the true lesson of Auschwitz, isn't it, Jeremy: 'the Holocaust dead might win you a few votes'.

Will decent people in public life, who have a platform, please use it NOW to condemn Mr Hunt’s linking of Mr Corbyn with the horrors of Auschwitz?
There is ZERO evidence to support this appalling accusation.
Will they have the moral courage to stand against the frenzied hysteria?

Jeremy Hunt today – “When I went to Auschwitz I said to myself, ‘thank goodness we don’t have to worry about that kind of thing in the UK’ and now I find myself faced with the leader of @UKLabour who has opened the door to antisemitism”.

This is an utterly disgraceful slur.

Jeremy Corbyn has a long track record of opposing antisemitism, having tabled or supported at least 10 Early Day Motions, spanning from 1990 until 2015, specifically condemning anti-Jewish racism: 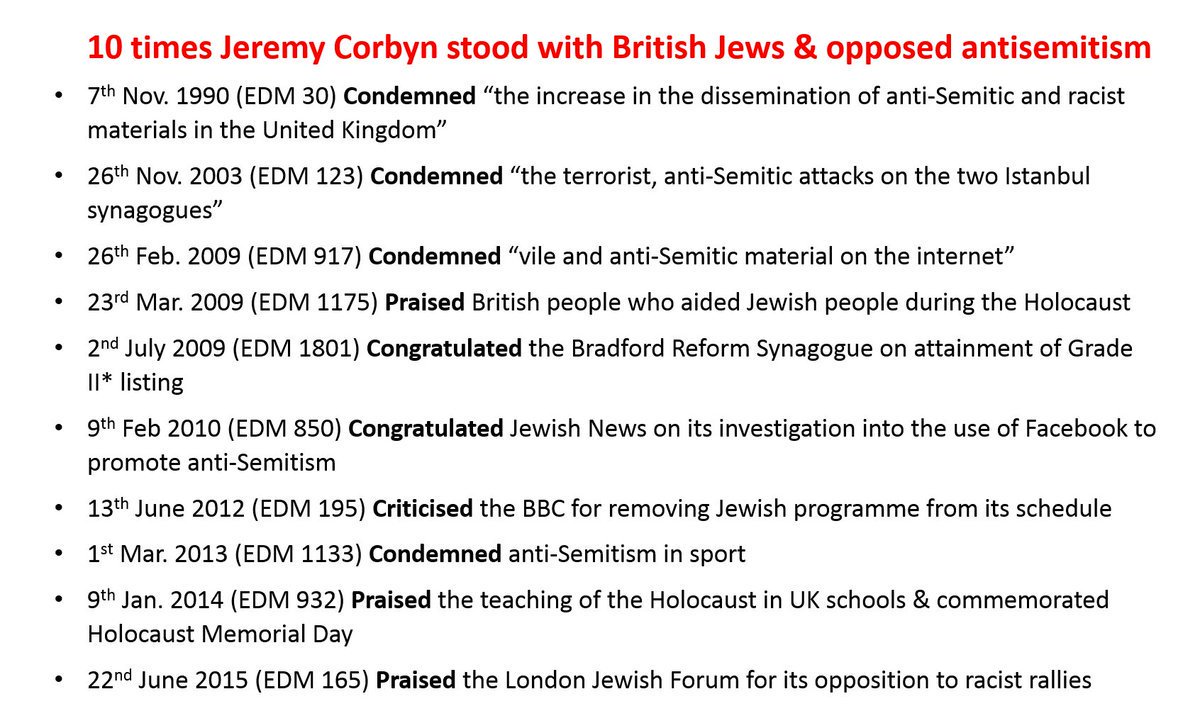 And in 2016, on the 80th anniversary of the infamous battle of Cable Street, Jeremy Corbyn fought back tears whilst delivering a speech about how his mother marched against Oswald Mosley’s fascists to defend Britain’s Jewish community: