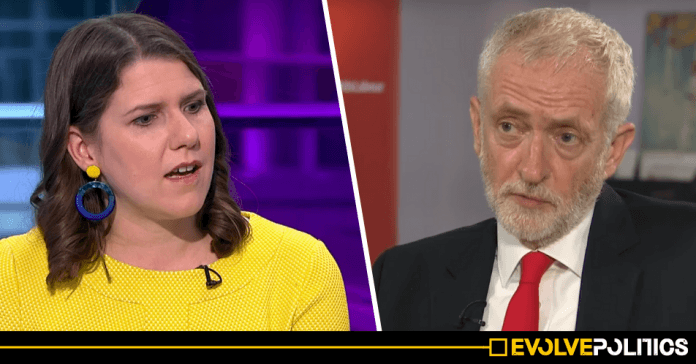 The newly elected leader of the Liberal Democrats, Jo Swinson, has been roundly criticised on social media after falsely claiming that the Labour leader Jeremy Corbyn “didn’t fight to remain” during the 2016 EU Referendmum campaign.

Writing on Twitter, the Lib Dem leader posted a link to a Guardian article which claimed that Labour could stay neutral in a second referendum, adding her own caption which stated:

“Jeremy Corbyn didn’t fight to remain in 2016, and he won’t fight for remain now. He wants to deliver a Labour Brexit, because he is a Brexiteer.“

Ms Swinson’s claim that the Labour leader “didn’t fight to remain in 2016” came despite the fact that Mr Corbyn made 123 media appearances, attended 15 rallies, and posted 118 pro-Remain tweets during the campaign.

The Lib Dem leader was also accused of ‘astonishing hypocrisy’ after details of her own ‘pitiful’ campaigning record during the EU referendum came to light.

According to statistician and data analyst Matt Thomas, there is no record of Swinson attending a single pro-Remain rally, and no record of the Lib Dem leader making a single media appearance in favour of Remain during the 2016 camapign.

In fact, it appears that Swinson’s entire contrbuton to the Remain cause was a ‘handful of trivial tweets’:

Not only was Swinson virtually invisible during the refendum campaign, research by Loughborough University has shown that not a single Liberal Democrat MP – including their then leader Tim Farron – made it into the top 30 politicians ranked by number of media appearances.

Swinson has endured widespread criticism since becoming leader of the Lib Dems on 22nd July, most notably for refusing to support Labour’s bid to stop a ‘catastrophic No Deal Brexit’.

Despite the Lib Dems only have one widely known policy – being against Brexit – the party leadership refused to support Labour’s plan to oust Boris Johnson and form a caretaker government with the sole intention of stopping a No Deal Brexit.

Ironically, the Lib Dems attempted to back up their anti-Corbyn stance by claiming that they would prefer Tory MP Ken Clarke to lead any temporary government – despite the fact that Mr Clarke has repeatedly voted in favour of Theresa May’s Brexit deal and does not support a second referendum, in complete contrast to Mr Corbyn.