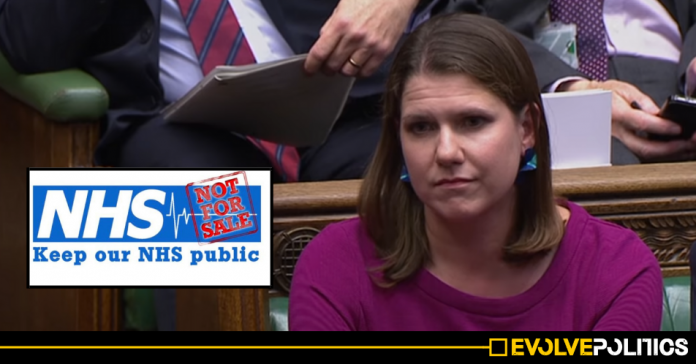 Jo Swinson and the Liberal Democrats have refused to support a motion to bring an end to the widely-despised practice of privatisation of public NHS services.

The motion was brought forward by Labour leader Jeremy Corbyn in Parliament tonight, and called on MPs to back the idea of all NHS services being brought back entirely into public hands and to fully protect the NHS from all aspects of future post-Brexit trade agreements.

Almost every Labour MP voted in favour of the motion, including notorious rebels John Mann and Kate Hoey.

Furthermore, even MPs who defected from the Labour party to join the Independent Group for Change – Mike Gapes, Joan Ryan and Ann Coffey – voted in favour of the motion.

Labour were also joined by the SNP, Plaid Cymru, and the Green Party in backing the move.

However, Jo Swinson’s Lib Dems were notoriously absent – with all 19 of their MPs abstaining.

“The truth is that thanks to the Tory reorganisation of the NHS, where billions of pounds of health contracts are privatised every year, the NHS is on the table in any trade deal with Donald Trump.”

“The Tory sell-out deal will see US corporates running more NHS services while big US pharmaceutical companies force our NHS to pay more for vital medicines.”

“Under the Tories, NHS privatisation has more than doubled. The only way to protect our NHS is to bin the Tory privatisation rules and restore a public NHS for all.

During today’s PMQs, Jeremy Corbyn reiterated the point that under successive Tory governments, NHS privatisation had “more than doubled to £10 billion.”

The motion was eventually defeated by a margin of just 28, with 281 Tory MPs, 19 Independent MPs – including 18 former Tories and former Labour MP John Woodcock – plus all 10 DUP MPs voting against.

During the 2010-2015 coalition government, the Lib Dems joined the Tories in systematically carving up the NHS and selling off key services into private hands.

The Tories just voted against Labour's motion to safeguard our NHS from being sold off to US corporations in a Johnson-Trump trade deal. And the @LibDems, who voted to privatise the NHS when in coalition, abstained.

Labour built the NHS and we're the only party that can save it.

Despite the pratice being deeply unpopular with the public, the Lib Dems’ decision to abstain on tonight’s anti-privatisation motion clearly shows they still do not oppose the policy of NHS privatisation.

“Tonight, Tory MPs have refused to safeguard the NHS from a Trump deal sell off that locks in privatisation. The actions of Tory MPs and inaction of Lib Dems who abstained, risks further privatisation of our health system and could open the door to US pharma forcing our NHS into buying more expensive medicines. This yet again shows only Labour can be trusted with our NHS.”