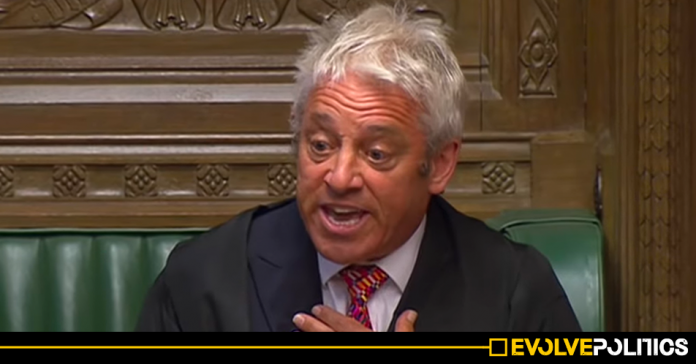 The recently retired Speaker of the House of Commons, John Bercow, has made the astonishing revelation that one of his fellow Tory MPs once warned him that Jewish people like himself should be banned from Parliament.

In an exclusive interview with The Times, the former Tory Speaker said that the only antisemitism he ever experienced in the House of Commons was directed at him by his own Conservative Party colleagues.

In addition to saying that Jews should be banned from Parliament, Bercow’s Tory colleague also reportedly told him that “lower-class” people shouldn’t be allowed to become MPs.

Asked about his experiences with anti-Jewish racism in Parliament, Bercow told The Times:

Bercow was then asked “How many times?“, before replying:

“It’s very difficult to put a figure on it. A lot was subtle. I remember a member saying, ‘If I had my way, Berkoff, people like you wouldn’t be allowed in this place.’

“And I said, ‘Sorry, when you say people like me, do you mean lower-class or Jewish?’ To which he replied, ‘Both.’”

During the interview, the former Speaker also expanded on his decision to serve as the Secretary for the anti-immigration, pro-repatriation Conservative Monday Club, stating:

“Here I was, a Jewish boy … sidling up to racists.” It was an “appalling decision”.

In November, Bercow revealed that – contrary to relentless media accusations – he did not believe Labour leader Jeremy Corbyn was antisemitic, adding that:

Following Bercow’s retirement last year, Boris Johnson refused to nominate him – as per the centuries-old convention – for elevation to the House of Lords.