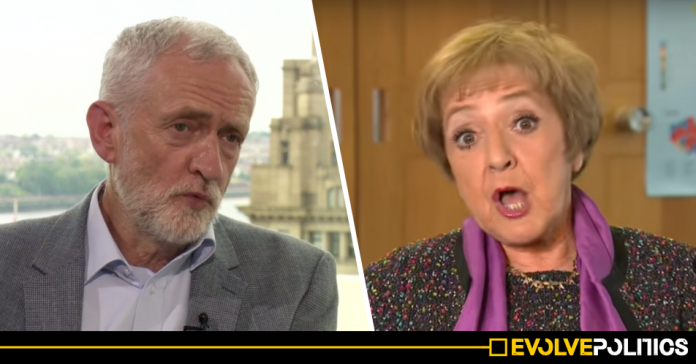 The MP at the centre of a furious year-long row surrounding antisemitism within Labour, Margaret Hodge, could be expelled from the party after a leaked tape revealed that she told members to vote for rival parties at an event last week.

During the event hosted by the Blairite think-tank, Progress, the Labour MP for Barking, Margaret Hodge, reportedly urged members of her own party to vote for rival parties at the upcoming European Elections.

According to The Times, when the Labour MP was asked if she agreed with a panelist who said that all party members should vote for Labour in the upcoming contest, she replied by directly stating “No, I don’t“, before adding:

“I think taking whatever action you need, within your locality, that gives you the best likelihood of electing somebody who will be a pro-European MEP, I think is the way you should go, I really do.”

“I know that’s controversial but sometimes we allow the tribalism of politics to override the values and judgment we need to take on particular issues.”

Following the revelation of Hodge’s comments, a Labour Party source told Evolve Politics that the Barking MP could, and should, be expelled from the party, stating:

“Margaret Hodge’s only political ambition at present is to disrupt and undermine her own party by encouraging an electoral backlash against them.”

“She is selfishly trying to deny those who desperately need a Labour government the help they deserve – purely out of opportunistic anti-Corbyn posturing. Enough is enough. There will be a backlash from the Parliamentary Labour Party if she is removed – but right now, it is the only possible option.”

“Hodge’s comments clearly show that she does not have the best interests of her own party at heart, and I would urge our General Secretary, Jennie Formby, to take urgent action to remove her from the Labour Party.”

Following her leaked comments being revealed, Hodge attempted to distance herself from them by claiming that she “misspoke“, and adding:

“What I was trying to say was… in trying to understand why Labour party support is collapsing, which it is, I can understand why people are voting tactically. But I would never advocate voting against the party.”

It is understood that a formal complaint against Ms Hodge will be lodged with the party shortly.