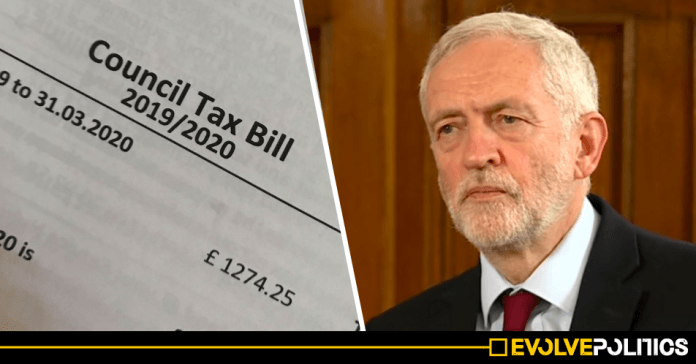 Jeremy Corbyn’s Labour Party have unveiled a raft of new policy ideas designed to solve the housing crisis and make the economy fairer for the least well off – plans which include abolishing Council Tax entirely and replacing it with a “progressive property tax” to be paid only by asset-rich homeowners.

The policy paper, entitled ‘Land For The Many‘, has been co-authored by a host of progressive luminaries including Guardian journalist George Monbiot, and outlines 9 multifaceted policy recommendations which could be implemented by a future Jeremy Corbyn-led Labour government.

The most eye-catching of the proposals is a plan to replace Council Tax with a “Progressive Property Tax” levied only on homeowners – meaning that private renters and low earners unable to get on the housing ladder would be completely freed from the burden of Council Tax.

The policy paper recommends that the new tax should be “based on contemporary property values“. and would only be “payable by owners, not tenants“, adding that the new system would:

“generate more revenue, encourage the more efficient use of the housing stock, leave the large majority of households better off, and boost average disposable incomes for the least wealthy half of population.”

Furthermore, the paper also suggests that people owning the least valuable properties – those in the bottom 10% of regional house price scales – should not be liable for the tax at all, and that the tax rate should progressively increase according to the estimated price of a property, meaning that only the very wealthiest homeowners would bear any significant financial burden:

“Unlike council tax, the progressive property tax rate would be based on regularly updated property values, and the rates would be set nationally, rather than locally determined. The level of redistribution between local authorities would need to increase substantially under this system, to ensure that the local authorities with high social needs and low land values are not left dependent on central government grants. However, there could be a tax free allowance that varied regionally so as to make, for example, the least valuable 10 per cent of properties in each region tax-free. Progressivity should be further improved by levying a progressively higher rate of taxation on each of the top 4 deciles of property by value.”

Another innovative new idea in the paper suggests setting up a “Common Ground Trust” which could drastically reduce the price of buying a house by as much as 70% by effectively separating the ownership of land and property:

“One function of the Common Ground Trust is as a non-profit institution that helps prospective buyers purchase homes. At their request, it will buy the land underlying a house, making the upfront deposit for home ownership much more affordable. In return, the buyers pay a land rent to the Trust . By bringing land into common ownership, land rents can be socialised rather than flowing to private landlords and banks.”

“[…] Since bricks and mortar account for 30% of the price of a property on average, this would allow people to put down much lower deposits and take on much lower mortgage debt than is currently the case, particularly in high land value areas. The new buyers would sign a lease that would make them members of the Trust, and entitle them to exclusive use of the land in return for paying a land rent. When moving house, members would sell their bricks and mortar, while the Common Ground Trust would retain the title to the land.”

Other notable ideas in the report include:

You can read the full paper here.