The Leave campaign today at least proved one thing to the world. There is something lower than a snake’s backside, and it’s the mental pygmies who dream up their campaign material.

A poster already denounced as ‘shameful’ by all the major parties today was cobbled together shortly after the Orlando killings in which a gunman killed 50 nightclub revellers and injured over 50 more. It was quickly removed but it gave us a glimpse into the sewer that appears to run between the ears of at least some of the Brexit team.

Rather than seeing this heinous crime for what it was, feeling for the people who have lost their lives and their loved ones in such cruel and spiteful way. Instead of showing an ounce of respect or sympathy, they spotted what they thought would be a nice big button to push. Something they assumed would be a rallying call their faithful.

Now I have no idea if they’re right about that. I’d like to think they weren’t. But it’s a telling indication of the low level of esteem the leaders of Leave afford to their own supporters.

It appears that no depths are too low for them to plumb and no atrocity is sacrosanct if they think they can persuade a few more knuckle-dragging xenophobes that Johnny foreigner is out to get them.

The poster, backed with a fetching picture of some ISIS fighters, suggested that Islamist extremism was a real threat to our way of life. Unhelpfully they don’t define what this way of life is. 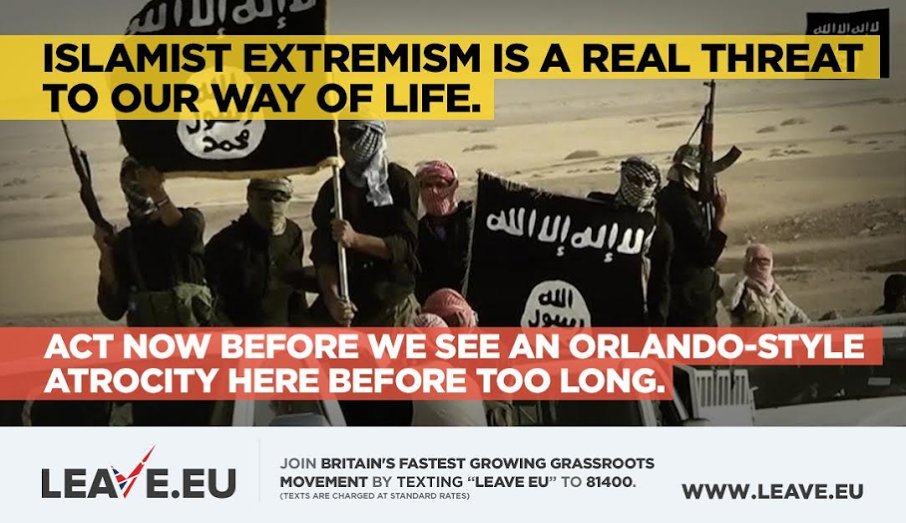 According to most of their previous rhetoric it’s usually something to do with cricket, cream teas, antimacassars and invoking the spirit of Churchill. Although I will admit that I’d not be that keen on sitting down to a pot of Earl Grey and a buttered scone with anyone from ISIS, I think they’re unlikely to be targeting the Penrith tea rooms any time soon.

The poster goes on to implore the general public to ‘act now before we see an Orlando style atrocity here before too long’. Leaving aside the painfully poor sentence construction, I’m rather dumfounded at their lack of knowledge of British history.

As a group that constantly calls for us all to hark back to the good old days, it’s surprising that they don’t seem to have realised that we’ve already had such an outrage perpetrated in this country. In just over a year we’ll be commemorating the 10th anniversary of the 7/7 bombings. As in Orlando, these too were carried out mostly by home-grown extremists.

3 out of the 4 London bombers were British born. The fourth hailing from Jamaica. No EU bogey men slyly slipping under the steam driven EU radar into our sceptred isle. No, all their resentment, hatred and spite was fermented in good old Blighty. Mistrust and prejudice all stamped ‘made in Britain’. An example of self sufficiency that I imagine Brexiteers won’t be quite so proud of come the glorious revolution.

Similarly, in Orlando the gunman was US born. Yes he claimed allegiance to ISIS, but any real connection is a long way from being established. It’s just as likely at this point that his motivation was a hatred of gays. Especially after hearing the comments made by his father today.

Membership of the EU does not make us any more vulnerable to attack. Our security forces and border controls can just as effectively be applied to EU migrants as they can to those outside the EU.

Even without free movement rules, prospective terrorists can gain entry to the country by various means. Ticking that box on your referendum ballot paper isn’t going to send a beam from the heavens to magically spotlight anyone who means us harm.

Once freed from the yoke of the EU dictatorship, we may try to pass a rule that all terrorists should grow handlebar moustaches, wear stripy vests, and carry a large round object helpfully labelled ‘BOMB’, but I doubt they’ll comply.

Terrorist infiltrators infiltrate. The clue is in the word ‘infiltrate’. Look it up in the dictionary. It’s there right next to ‘idiot’. OK It isn’t, but if you believe the crap from Leave you won’t bother checking the facts anyway.

As both the UK and the US have discovered, it’s often the case that the extremists are already here amongst us. Equally as often, they’re made within a culture of resentment inspired by the sorts of people who make political capital out of human tragedy.

If anything, membership of the EU makes us safer. Exchanging intelligence between member states means that they’re much more likely to be stopped before they ever get to the arrivals lounge in the UK.

Separating ourselves from institutions like Europol and relying on our own hard pressed border controls could even mean we’re more likely to miss someone on the way in. And with almost as many migrants arriving from outside the EU we’ll be no safer anyway.

If the poster tells us anything, it’s what a grim and miserable place the UK will be if we let these people have their way. A country where everyone is a suspect and someone else’s personal suffering is simply seen as useful ammunition for winning an argument.

My thoughts go out to those touched by the events in Orlando and I of course hope that no one else has to suffer in the same way ever again. But to help prevent that we have to start looking for reasons to trust each other and to embrace cultures and lifestyles we might at first find threatening, rather than pillaging the worst in human nature as the subject for a cheap, tawdry, throwaway meme.