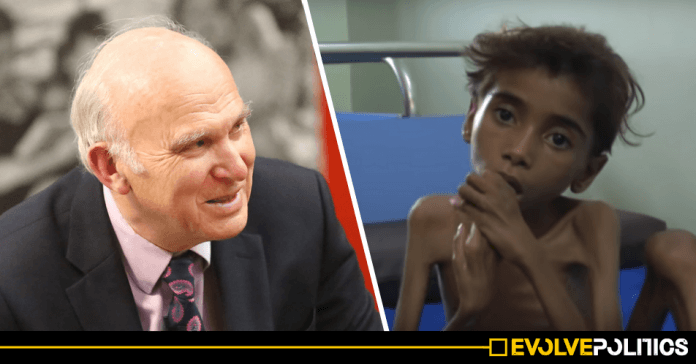 The outgoing leader of the Liberal Democrats, Vince Cable, has been utterly castigated on Twitter after posting an astonishingly hypocritical tweet regarding today’s Court of Appeal decision ruling that UK arms sales to Saudi Arabia were unlawful.

Earlier today, the Court of Appeal ruled that British arms sales to Saudi Arabia were unlawful as government Ministers had failed to assess the likelihood of them being used to indiscriminately kill civilians in Yemen.

Responding to the verdict, the Lib Dem leader, Vince Cable, tweeted that he was “Delighted by the arms sales court ruling” and accused the Tories of having a “casual approach” to Saudi arms sales:

“Delighted by the arms sales court ruling. The Conservative Government disregarded the restrictions I sought to impose in May 2015 and now their casual approach to this brutal regime has caught up with them.”

Delighted by Saudi arms sales court ruling. The Conservative Government disregarded the restrictions I sought to impose in May 2015 and now their casual approach to this brutal regime has caught up with them. https://t.co/w0HeZKqQkS

However, despite claiming that the Conservative Party blocked his proposed restrictions, it was actually Vince Cable himself who had the responsibility of signing off on arms sales to Saudi Arabia during the start of their devastating war in Yemen.

Cable was the Business Secretary in the Conservative/Lib Dem coalition government from 12th May 2010 until 11th May 2015, and had the sole responsibility of approving all the UK’s trade deals and exports, including arms sales.

During his time as Business Secretary, figures from Campaign Against the Arms Trade (CAAT) show that Cable signed off on an estimated £37Bn worth of weapons exports, including £8.6Bn to Saudi Arabia.

On March 22nd 2015, Saudi Arabia began their catastrophic campaign in Yemen – a war which has now claimed the lives of almost 100,000 civilians and has left the country on the brink of the world’s worst famine for a century.

Astonishingly, despite Cable’s claim today, in the two months between the start of the war in Yemen and his departure as Business Secretary in the 2015 General Election, CAAS figures show that Cable continued signing off on millions of pounds worth of weapons sales to Saudi Arabia.

These facts were seized upon by Labour MP Lloyd Russell-Moyle, who accused the Lib Dem leader of astonishing hypocrisy, tweeting:

“I’m sorry Vince but in 2015, before 100,000 had been killed, you, and you alone as BIS SoS, had statutory power to suspend licences but you didn’t because you caved to pressure from Fallon and Cameron.

Quite the classic Lib Dem play do nothing and claim the moral high ground.”

Unsurprisingly, Cable’s hypocrisy was also slammed by numerous others:

You literally okayed the licences in government.

You signed off on the export licences, it was in your power to stop Saudi atrocities but you went along with them.

Despite the Court of Appeal’s ruling today, and despite the catastrophic humanitarian crisis facing Yemen, the Conservative government have already confirmed that they will not immediately cease weapons sales to Saudi Arabia:

For more information about how vital British arms sales and training are to the Saudi’s devastating campaign in Yemen, have a read of this extremely eye-opening Guardian article by Arron Merat.