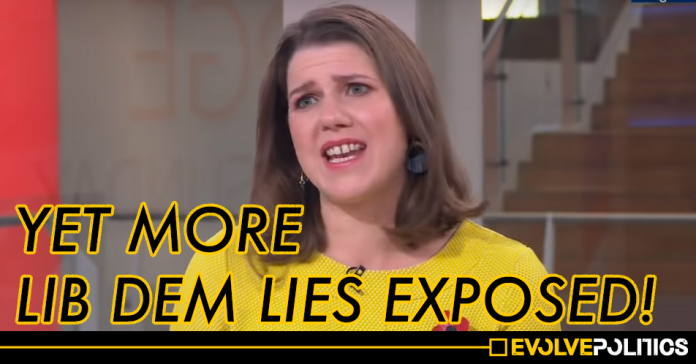 Jo Swinson’s Liberal Democrats have been embroiled in a second fake news scandal in a matter of days after it was revealed that official Lib Dem General election leaflets contained fake quotes purporting to be from reputable mainstream media outlets, but were in fact direct quotes from the Lib Dem leader herself.

The Guardian Reporter Heather Stewart last night revealed that the Lib Dems had published and distributed a “dodgy” leaflet to her in her constituency with quotes such as:

“The Lib Dem fightback is real and it’s changing everything”

Despite the Lib Dem leaflet claiming that this quote was from Sky News, it was actually a direct quote from Jo Swinson herself who had been appearing on Sky News.

Furthermore, the leaflet also contained another quote stating that the “Lib Dems winning and on the up after by-election victory” – a quote they claimed was taken from The Guardian.

However, once again, this quote was directly from the mouth of Jo Swinson who was being quoted in The Guardian article reporting their by-election victory in Brecon and Radnorshire in August.

However, the Lib Dem MP claimed that she had “no knowledge” of the leaflet and refused to comment on the situation.

You can watch the video of the Lib Dem candidate being called out below:

The latest Lib Dem fake new scandal follows hot on the heels of the Lib Dems being called out for publishing extremely misleading bar charts which falsely claimed they were the closest challengers to the Tories in a number of constituencies.

The Lib Dems haven’t been the only political party to be embroiled in a fake news scandal during the opening days of the General Election campaign, with the Tories also being slammed for publishing a doctored video of Labour’s Brexit Secretary Keir Starmer yesterday.

Jo Swinson is yet to comments on the Lib Dem’s latest fake news controversy.