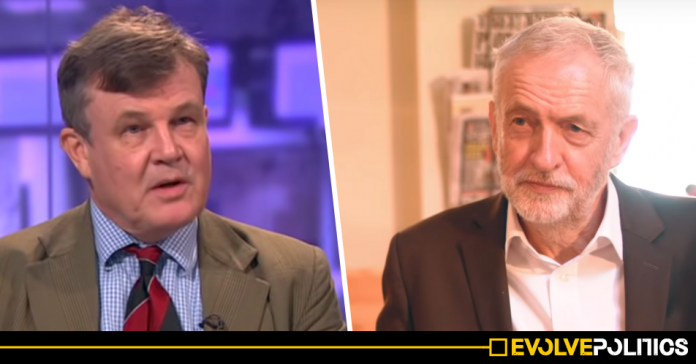 The respected journalist and lifelong supporter of the Conservative Party, Peter Oborne, has made the shock announcement that he will be voting for Labour in the upcoming General Election as is unable to justify the party’s “lies” any longer and believes Boris Johnson is intent on ‘destroying the country he loves‘.

Writing in an article for the Guardian, Oborne – who previously worked as the pro-Tory Daily Telegraph’s Chief Polical commentator and has voted Tory all his life – stated that “Something horrible has happened‘ to the Conservative Party under the leadership of Boris Johnson:

“Something horrible has happened. The Conservative party lies. It cheats. It bullies. It’s not the wise, gentle, decent party of the postwar era.”

Oborne goes on to explain that “The Conservativism I understand is about public duty, generosity, the instinct to conserve what is good in our society; the importance of the rule of law and of institutions“, adding:

“Johnson has become the leader of a project – his adviser Dominic Cummings is an important part of this – to destroy Conservatism. This is why during his brief term as prime minister Boris Johnson has attacked parliament, mocked the rule of law, abused the monarchy, and shown a total disregard for the truth.”

The former Telegraph journalist then goes on to list further examples of Johnson’s failures:

“He suppressed a report about Russian interference in British politics, then lied about the reasons. In the past few days, the prime minister has resorted to an ugly racism towards EU nationals in a last-ditch attempt to win votes. In a genuflection to Rupert Murdoch, he’s calling the BBC licence fee into question. Johnson’s Conservatives are a revolutionary sect and should be understood as such.”

Oborne then goes to to slam the mainstream media, and especially their highly slanted reporting on racism within the Labour Party and the racism spouted directly from Johnson himself, stating:

“In normal circumstances I would never vote for Labour, let alone Corbyn. I still wouldn’t if I believed the terrible charge that he is an antisemite. There is a problem of antisemitism in the Labour party. And Corbyn has handled the problem badly.”

“I don’t deny the dreadful actions of some members of his party, but I’m not aware of evidence of Corbyn using derogatory language about Jewish people in the way that Boris Johnson routinely has against black people, gay people and Muslims.”

“Imagine the collective denunciations of Corbyn had he been guilty of the racist and homophobic remarks attributable to Johnson: phrases such as “piccanninies”, “watermelon smiles” and “bumboys”. There’s a double standard here.

“Johnson has not shown the slightest appetite to deal with the virulent Islamophobia that poisons the Conservative party. The mainstream press in Britain has practically ignored this issue. That’s because most British newspapers are themselves Islamophobic. Johnson’s claim that his party has “zero tolerance” for Islamophobia is yet another of the cynical lies that have been the defining feature of his political campaign.”

Oborne then proceeds to heap praise on Jeremy Corbyn for being on the right side of history regarding Foreign Policy throughout his career, stating:

“The establishment has always hated radicals like Corbyn. And it’s determined to stop him. Hence the repeated attack that Corbyn can’t be trusted on security and foreign policy.

“It’s true that he opposed the three great foreign policy catastrophes of the 21st century: Afghanistan, Iraq and Libya. The damage done by Iraq to our national security was huge. Corbyn was right, while Johnson and the Tory party were enthusiasts for all three.”

Oborne – who voted for Brexit in the 2016 referendum – also lavished praise on Mr Corbyn’s stance on Brexit – claiming that the Labour Party’s policy on the EU is a “wise solution” – whilst stating his belief that the Tories are not being honest with the public about how long Brexit will drag on for under the Mr Johnson’s plans:

“Corbyn is offering a wiser solution to the Brexit problem than Boris Johnson: a final-say referendum offering a choice between remaining on existing terms or continued membership of the customs union.”

“By contrast, Johnson is offering a guarantee that we will leave in January, followed by a transition period lasting implausibly to the end of next year, after which we could find ourselves operating alone on World Trade Organization rules. He’s in open denial about the consequences for trade with Northern Ireland.”

Until recently, Oborne was a vehement supporter of the Conservative Party and fully backed Theresa May’s leadership of the party.

However, since Boris Johnson became leader, he has been an outspoken critic of the party.

Why I as a Conservative will vote for Jeremy Corbyn. https://t.co/6RmY6nZNcW

Despite Oborne’s recent criticism of the direction the Tories were taking, his announcement that he will be supporting Jeremy Corbyn in the upcoming General Election is truly revelatory.