Right wing contrarian provocateur Milo Yiannopoulos had been invited to talk at his alma mater, the Simon Langton Grammar School for Boys in Canterbury tomorrow. Not surprisingly, it’s just been announced that his visit has been cancelled after the school took advice from the Department for Education Counter Extremism Unit. This will no doubt spark claims from Mr Yiannopoulos about the sanctity of free speech and a fair bit of bottom lip trembling over how misunderstood he is.

Whilst I tend to agree that banning speakers because you don’t want to hear what they have to say is not a good example to set to schoolchildren, I think on occasions like this there’s some justification. Especially as it’s quite a tricky prospect to determine if Milo ever actually means what he says. The video clip of his recent encounter with Channel 4’s Cathy Newman has been doing the rounds of late. Much shared and possibly achieving viral status, a visibly angered Newman attacks Yiannopoulos over some pretty dreadful comments he’s made about women, in particular about them being ‘allowed’ to use the ‘men’s internet’ as long as they follow his rules.

His response to a tirade of accusation was that these comments were never intended to be taken seriously. He repeatedly asks “can you not see the humour in that?” From the interviewer’s reaction I’m guessing she wasn’t planning on adding it to her list of after dinner jokes. Yiannopoulos seems to have become the go-to guy when TV channels need a sexist comment or two. There’s a link on his YouTube channel to an interview he was involved in concerning the spat between Jose Mourinho and his female medic. It’s wittily entitled “Milo knows f*ck-all about Kicky Kicky Funball” and that’s clearly accurate.

It does beg the question as to why he was invited on to discuss the story, except for the hope that he’d say something controversial. In the end he didn’t really. He mostly wobbled his head and grinned like a smug nodding dog dashboard ornament. He came across like an eager schoolboy bursting to show how desperately clever he was. In the end, he just repetitively asked why the issue was even being discussed. On that point at least, I agreed with him, at least while he was in the studio.

Yiannopoulos has apparently been dubbed a cross between a Pitbull and Oscar Wilde. It wouldn’t surprise me if he supplied that quote himself. Whatever else he is, he’s certainly a legend in his own mind. But from what I’ve seen, it’s a hybrid born more of a Labradoodle and Bernard Manning. His Facebook page has some distinctly optimistic and rather cloying fan imagery of his involvement with the ‘Gamergate’ controversy, during which a female games designer received rather elaborate threats of violence from some members of the gaming community. His book of poetry, released in 2007 was later found to be nothing more than a cut and paste exercise in other people’s words, including song lyrics from Tori Amos. After being outed for plagiarism, he of course claimed that this was all just a ‘piss take’. A by now familiar defence of his work over which I’m sure Oscar would have dutifully soiled himself in mirth and admiration.

His failed attempt at starting his own media platform left several staff members unpaid, who later received threatening emails from him for having the temerity to ask him to settle up. Prior to all this, he dropped out of university not once but twice. There’s an Oscar Wilde reference I could shoe-horn in there about carelessness, but I really can’t be bothered. Spurious claims on Twitter and later trolling attacks on African American actress Leslie Jones got him permanently banned from the platform, although he has since been described by some as ‘charming’. Presumably people who also find the idea of root canal surgery a soothing experience.

The ultimate conclusion to the Channel 4 interview though was that he didn’t care about people’s feelings, only about what they thought – a nebulous distinction he didn’t qualify. He then launched into a comprehensive condemnation of US society for caring about such things as Black Lives Matter, feminists, hand-wringers and social justice warriors. People he calls ‘the grievance brigade’. This ‘facts are all that matter’ rhetoric has its roots in Milo’s engagement with the so-called alt-right movement, which is essentially the extreme right re-branded through the distorted prism of web based news sites like Breitbart.

He’s been quoted as saying that he and others were drawn to it as it promised “fun, transgression, and a challenge to social norms”. This includes offensiveness for its own sake and an adherence to a neo-reactionary mantra that seeks to strip away all self-censorship. One aspect of the alt-right doctrine is a strict adherence to rationalism in its basest form. Feelings shouldn’t be considered, we should only make decisions based on facts and provable concepts. A reductionist view of the human condition that has its roots in computer science but also pretty clear paths to other radical right wing ideologies including eugenics and libertarian conservatism. When you strip away the hipster spin, there’s very little about the alt-right that could be described as particularly alternative. Facets of the movement include bulletin boards such as 4chan and 8chan where people swap images and memes and discuss controversial topics in overtly offensive terms. In this interpretation of the facts-based world, the idea that anyone should be offended is seen as passé. Maybe even decadent. 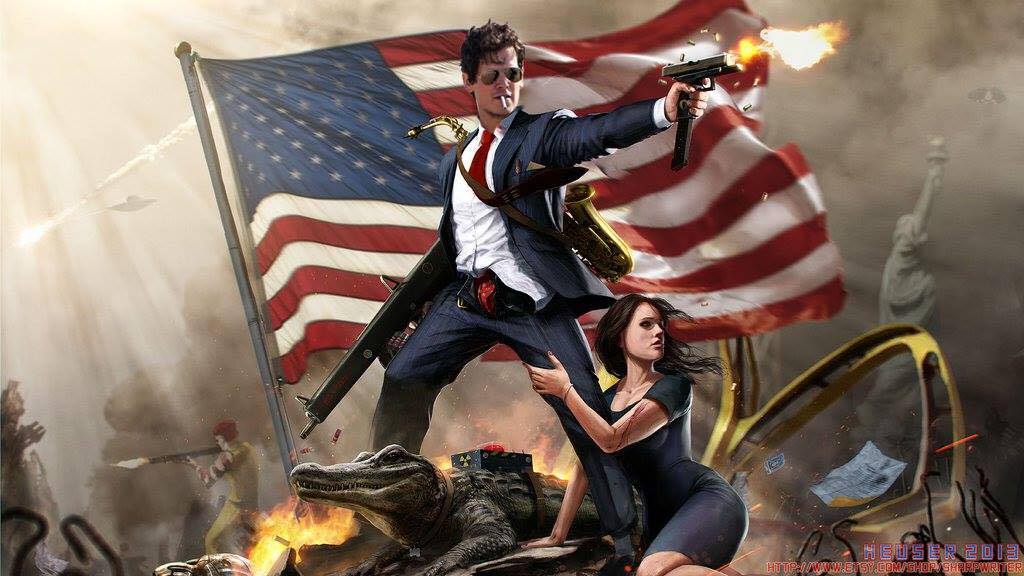 Certainly, it would be terribly bourgeois of anyone to be concerned about the feelings of others. In the same way that some gamers bugsplat pixels in imaginary landscapes with no concern and no consequences, we should all become emotionally detached automata in the real world too. In some aspects I agree that an obsession with avoiding offence can have a dangerously limiting impact on free speech. Tiptoeing around the ever increasing ways of giving offence does become tiresome, especially when people are so ready to read an insult into even the most glancingly critical comment. Outside of sustained attacks of online bullying, being offended isn’t generally life threatening. If you’re offended you get over it. You shout at the radio, you rant online, you write a Facebook post, then you get back to taking the bins out. But when giving offence becomes an end in itself, or deliberately hateful, it ceases to be ironic or disruptive. At that point it’s no longer a posture, it is simple spite or bigotry.

Then the ‘only joking’ defence is scant camouflage for that true intention. It’s also a self-defeating argument. If no one took offence, where would the ‘fun’ be in offending them? Milo’s track record of clickbait grandstanding, his support of Donald Trump and a de-facto association with the alt-right finally earned him a steady job on the Breitbart website. This mainly seems to consist of yet more women-baiting blog pieces and The Milo Yiannopoulos Show, a series of poorly recorded 45 minute podcast rants. I only managed 20 minutes of one outpouring which opened with him plugging a mattress delivery company. He then went on to discuss the Trump victory, suck mints and promote a brand of underpants. But inevitably the discussion returned to his favourite subject – himself.

In an irony you could probably knock nails in with, he spends some time bemoaning members of the gay media who have called him a white supremacist, according to him “out of nowhere”. How could these people be so thoughtless about the damage such an epithet could do to him personally, he asks. I make no judgement about whether that description is accurate or not, but it certainly seems like offence isn’t challenging and fun when you’re the one being offended. Maybe feelings do count after all. Of course this is not the first example of an aspiring wannabe using the shock jock doctrine to garner notoriety. Katie Hopkins could easily be Milo’s long lost auntie as she churns out the same purposely crafted bile in the gutter press.

Despite this, there are darker echoes of the alt-right’s flirtation with deliberate offence in Trump’s trademark boorishness. Whilst I doubt the offensiveness of Trump’s rambling speeches had any deliberate artfulness, they are certainly of the same canon and he’s unquestionably not a fan of self-censorship. There’s been much speculation since his win about how much of the rhetoric was meant to be taken seriously. I guess we’ll be finding out over the coming years. We can but hope that much of what he said was simple posturing. Breitbart’s association with the White House has now been cemented through current Chairman Steve Bannon’s selection as Trump’s chief strategist. After his appointment, Bannon reportedly announced in true self-effacing style “I am Thomas Cromwell in the court of the Tudors”. Perhaps he’s forgotten what happened to Cromwell in the end. One can only wonder how much more challenging of social norms we can look forward to, but I suspect we may all discover pretty quickly that some social norms are there for a reason and challenging them in government can be a rather trickier prospect than trolling someone on Twitter.

The phrase ‘post-truth’ is now firmly planted in the popular lexicon, but with people like this in government, I think we’re further down the rabbit hole than even Alice would have dared to tread. It’s somewhat ironic that a doctrine of facts before feelings may have led us here. When facts are replaced by fantasy, policy by whimsy, intelligence by egotism, and governance by posturing it’s likely that many of us won’t see the funny side of what’s to come, no matter how much people like Yiannopoulos claim it was all just a big old joke. The best we can probably hope for at the moment is that we’re all still around in 4 years to laugh at the punchline.