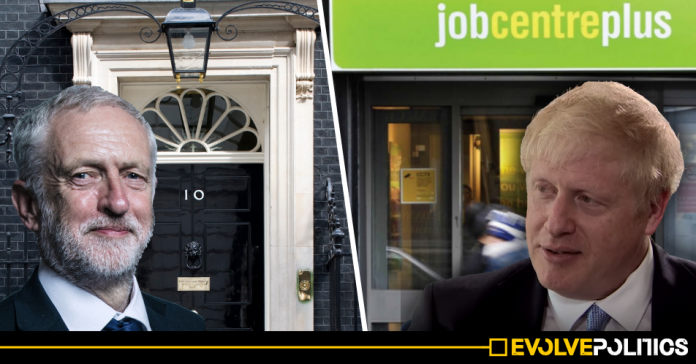 A new opinion poll has revealed that Jeremy Corbyn’s Labour Party have a huge chance of ousting the Conservative Party and forming the next government, should a General Election be held in the wake of a Brexit extension.

The poll, conducted by ComRes and commissioned by Britain Elects, show that the Tories’ poll numbers would drop to just 26%, should Boris Johnson be forced to extend Brexit negotiations past the 31st October deadline.

The poll also found that Labour would overtake the Tories into first place, should the PM sign the extension.

Hilary Benn’s bill to outlaw No Deal and force the PM to seek a Brexit extension passed its final Parliamentary hurdle on Friday, and now only requires royal assent for it to become law.

The ComRes poll, which consisted of 1,538 people, firstly asked respondents how they would vote if “A General Election is held before the 31st of October 2019, and Brexit has not been delivered“.

#Excl
Westminster voting intention:
“A General Election is held before the 31st of October 2019, and Brexit has not been delivered”:

However, the research then asked respondents how they would vote if a “General Election is held after extending the Brexit deadline beyond the 31st of October 2019“.

The results for this second question showed a 4-point drop for the Tories’ – down to to 26% – whilst The Brexit Party’s figures jumped 3 points to 17%.

Meanwhile, in this second scenario, Labour’s numbers went up to 28% whilst the Lib Dems dropped by a single point to 20%.

#Excl
Westminster voting intention:
“A General Election is held after extending the Brexit deadline beyond the 31st of October 2019”:

These latest intriguing results show that Boris Johnson would surely suffer a significant hit if he is forced by law to break his own central pledge to deliver Brexit on the 31st October.

Furthermore, the Labour Party managed to make up an astonishing 15 percentage points on the back of their hugely popular manifesto during the last General Election campaign, going from 25% at the start to 40% at the 2017 election.

At the start of the 2017 campaign, there was a staggering 25% gap between the two main parties, with the Tories polling at an astonishing 50% at one point.

With there now being barely a whisker between Labour and the Tories even before campaigning has begun, Downing Street will surely be looking at today’s polling numbers with trepidation.

Jeremy Corbyn has already proven that he – accompanied by a vast array of massively popular domestic policies such as scrapping tuition fees, renationalising the railways and a huge housebuilding scheme – has the ability to significantly boost his own party’s poll numbers during a traditional six-week General Election campaign.

In contrast, the Tories’ last General Election campaign was widely ridiculed, and their manifesto – which included the much-despised “Dementia Tax” – was seen as anything but inspirational by the public.

Despite the Tories’ failures at the last election, Johnson appears to have been so wrapped up in Brexit that – barring extremely vague assertions about expanding infrastructure and extra funding for public services – he has virtually no domestic policy platform of his own.

And if things weren’t looking bad enough for the Prime Minister already, Johnson faces the very real prospect of being booted out of his own seat at the next election.

Furthermore, Labour have been campaigning relentlessly in the area since Johnson succeeded Theresa May in Number 10, with the party’s Prospective Parliamentary Candidate Ali Milani said to be quietly confident of causing a major upset and unseating the PM.

On current trajectory, Labour stand a good chance of ousting the Tories and forming the next government – however, current polls show this may have to be in coalition with other parties.

However, the upcoming General Election campaign, as it was in 2017, will surely prove absolutely pivotal – and an outright majority should not be overlooked just yet.

What Do The Bookies Say?

The bookmakers are pretty certain that a General Election is imminent, with a November election looking the most likely at 11/8.

December is the next most likely month for a snap General Election at 9/4, and they’re offering long odds of 5/1 for the next election to be held in 2020 or later.

Given his tumultuous time since becoming PM, and with him now facing the very real prospect of being forced by law to sign a Brexit extension and breaking his biggest promise, the bookies see Boris Johnson being ousted as PM in the next 3 months as extremely likely, offering odds of just 5/4 for him to be given the boot or resign in 2019.

Despite this, the bookies still think the Tories will win the most seats in the next election – offering odds of 1/2 on the Tories to gain the most MPs, and 3/1 for Labour.

However, with anti-Brexit parties looking like they’re in the ascendancy in the polls, the bookies appear to be strongly countenancing a coalition government being formed after the next election – putting Jeremy Corbyn odds on favourite to become the next Prime Minister at 2/1, with the second favourite being the newly independent former Tory MP, Ken Clarke, at 12/1.