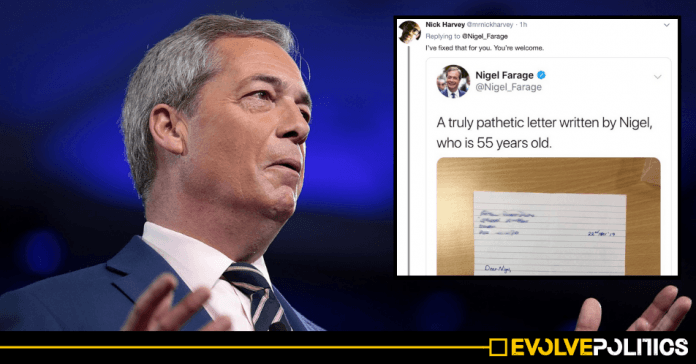 The leader of the Brexit Party and the main architect of the UK’s vote to leave the European Union, Nigel Farage, has been roundly mocked and accused of forgery after posting a photo of a bizarre letter he claims to have received from a 10-year old ‘fellow leaver’.

Earlier today, Farage tweeted that he had recieved “An amazing letter received from fellow leaver Matthew, who is 10 years old“, and attached a photo of the letter.

In the letter, the ten year old child claims, in impeccable handwriting, that “the majority of MPs in Parliament want to ignore democracy and over turn [sic] the referendum result“, before adding that his school supposedly tries to “brainwash us to be pro-EU“.

However, Matthew – who is only old enough to be in year 4 or 5 of primary school – insists that he is not falling for his teachers’ supposedly pro-EU propaganda, adding that “me and my friend Jim know their tricks“.

I’m a ten year old boy and I’m writing to express my gratitude to you and your Party. Without you the Leave Voters would have nobody to represent their opinions as the majority of MPs in Parliament want to ignore democracy and over turn [sic] the referendum result. At my school they try and brainwash us to be Pro-EU but me and my friend Jim (fellow Leaver) know their tricks.

Many thanks and good luck,

An amazing letter received from fellow leaver Matthew, who is 10 years old. pic.twitter.com/6ZDTAeOanj

However, not everyone was convinced that the letter was genuine, with Farage’s tweet receiving significant criticism and a huge numbers of particularly humourous replies accusing him of posting a blatant forgery:

This is possibly the lamest attempt at fraud ever

This letter was written by a 67-year-old woman named Janet who thinks you make a good politician because you're good at shouting angrily at the people she hates.

I’ve fixed that for you. You’re welcome. pic.twitter.com/KEkOQlyejU

Yes, this 10 year-old child conveniently gets the wording bang on brand. pic.twitter.com/jZptUJTudp

Yes this is definitely real and in no way made up. pic.twitter.com/beaAXLpMFK

It’s remarkable how a 10 year-old understands the complexities of Brexit and is able to compose a letter praising you, while being delicate enough not to go so far as to call you a superhero.

So remarkable in fact, it didn’t happen.

10 year old boy repeats Farage's rhetoric back to him word for word and says that he knows the tricks of people who try and brainwash him! Remarkable.

Hilariously, even Farage’s mates over at The S*n appear to be sceptical about the letter, describing the ten-year old’s handwriting as oddly “immaculate”.

And, perhaps most surprisingly, even The S*n’s notoriously gullible readers didn’t seem to be buying it, with 3 of the 4 comments on their own article expressing doubt: 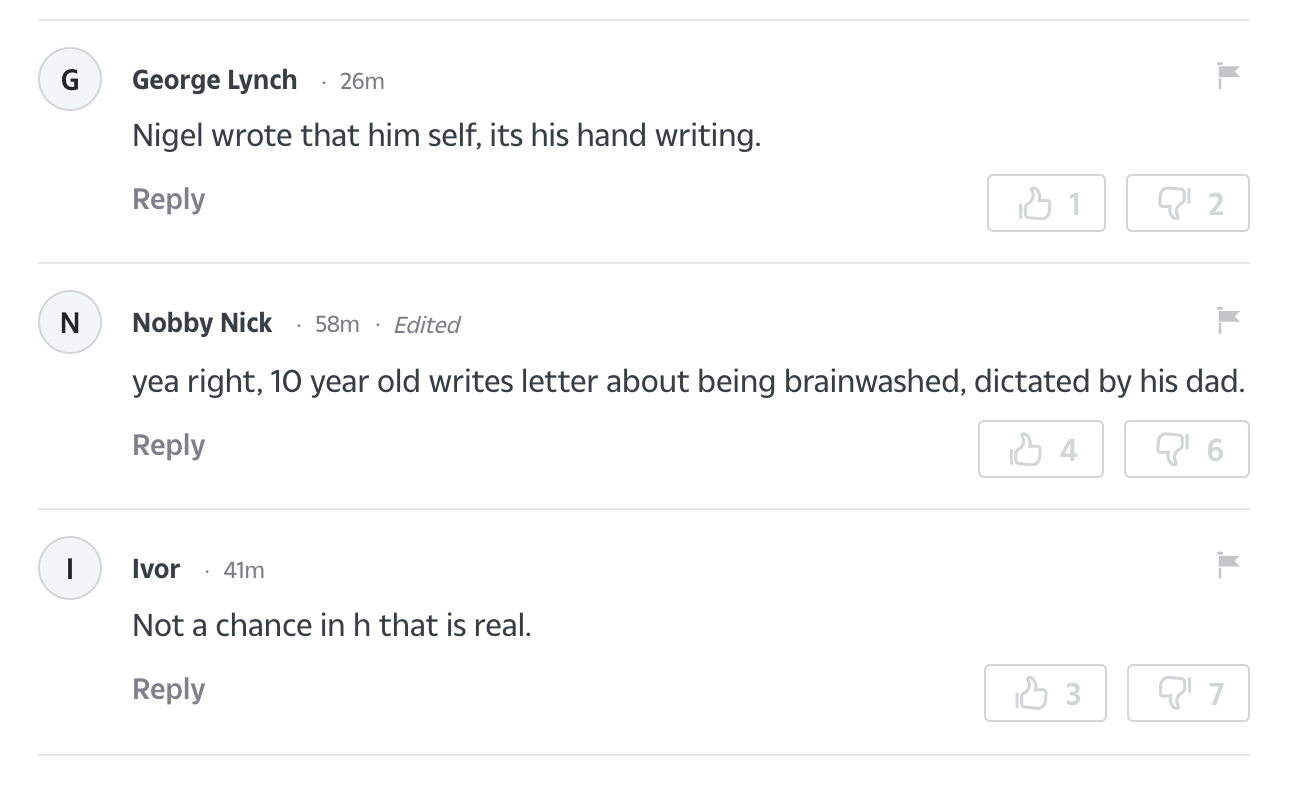 When even people who read The S*n have enough independent mental fortitude to doubt the veracity of something they are told, the jig is probably up.