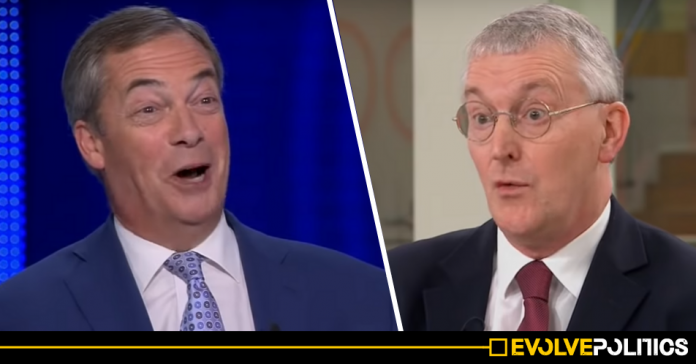 The leader of the Brexit Party, Nigel Farage, has sparked hilarity and ridicule on social media after coming out in favour of the law intended to prevent a No Deal Brexit and extend Article 50 – a bill which numerous Brexiteers have labelled the “Surrender Act”.

Earlier today, the EU announced that it had finally agreed a revised Brexit deal with Boris Johnson’s government.

Following the highly anticipated announcement, the EU President, Jean-Claude Juncker, appeared to rule out agreeing to any further Brexit delay – stating that there would not be “any kind of prolongation” and that “[Brexit] has to be done now“.

However, despite the UK’s departure from the EU now appearing to be within touching distance, Nigel Farage – who has consistently advocated for leaving the European Union – sparked confusion after expressing his immense displeasure at the situation.

“So an unelected, retiring bureaucrat says: No extension, take this new treaty or just leave.

He is overriding the Benn Act. The EU shows itself to be a thuggocracy – power without accountability. Appalling people.“

So an unelected, retiring bureaucrat says: No extension, take this new treaty or just leave.

He is overriding the Benn Act. The EU shows itself to be a thuggocracy – power without accountability.

Unsurprisingly, Farage’s apparent defence of the Benn Act – which has been consistently derided as the “Surrender Act” by Brexiteers – came in for intense ridicule by numerous social media users.

You are now…pro the Benn act?

for you social channels pic.twitter.com/2qaJrzgvqA

‘He’s overriding the Surrender Acr, how dare he!’

Have I just woke up in a parallel universe? Are you, like, @RemainerNow now?

Others speculated that Farage’s astonishing u-turn may have more to do with the fact that once Brexit is finally done, he will become irrelevent and lose his EU salary:

If Brexit is delivered, it makes him politically irrelevant and ends his gravy train at the European Parliament. https://t.co/tonTb75Kwm

Presumably; a deal is the worst of all worlds for our Nige. He loses his plum EU job and loses the prospect of cashing in on no deal disruption.

Whatever Farage’s real reasons for coming out in favour of a Brexit extension, this is surely a development that nobody could have predicted.