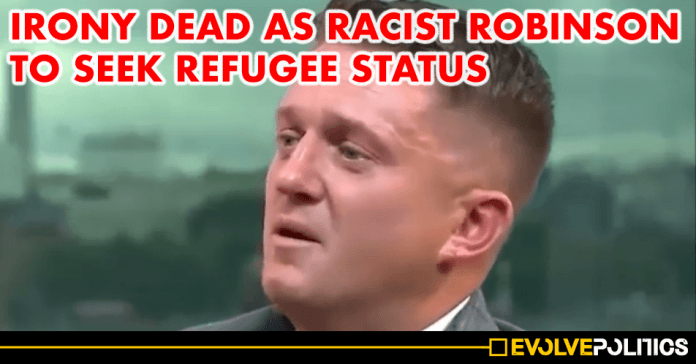 The anti-immigrant, anti-Islam, anti-refugee and rabidly racist criminal, Tommy Robinson, has just broken the irony meter after it emerged that he is reportedly seeking refugee status in the United States.

On Friday, Robinson – whose real name is Stephen Yaxley-Lennon – was convicted of multiple counts of contempt after filming outside the trial of a grooming gang in breach of strict reporting restriction laws.

With the far-right activist – who routinely rants against immigration and refugees – now facing two years in jail, it has emerged that he is, apparently with no hint of irony, applying for political asylum in the USA – a status which would literally make him a refugee.

According to far-right Infowars journalist, Paul Joseph Watson, Robinson is expected to claim political asylum on the grounds that he believes his life is now in danger.

According to Watson, “Robinson is set to appear on both the Alex Jones Show today and Tucker Carlson’s Fox News show at some point this week to make the asylum request.“

In his “exclusive” article – ostensibly based on briefings from Robinson’s teams – Watson also goes on to cite the United States Refugee Act of 1980, before implying that Robinson will make his application on the basis that he is ‘facing persecution for his political opinions‘.

Watson then goes on to whine that last time Robinson was in jail, “he lost over 40 pounds due to concerns about the inmates preparing his meals“, adding

“He also complained about being on the receiving end of physical and psychological abuse.”

Just when you thought irony was alive and well, the arch anti-refugee hatemonger Tommy Robinson is literally applying to be the very thing he repeatedly rants against – a refugee. What a time to be alive.