Theresa May’s decision to call an early General Election isn’t as big a surprise as it seems. Labour are polling poorly, largely thanks to hostile, inaccurate, sometimes dishonest mainstream media coverage. Disloyalty and hostility from Labour’s ‘chicken coup’ plotters has made a huge contribution to this.

The Liberal Democrats aren’t improving as much as they’d like, either. Their record of broken promises and nodding through Tory policies against the interests of many voters hasn’t been forgotten. Brexit is likely to become a reality at some point, so May wants to steal a march on the EU before exit negotiations begin. Despite her own change of mind on an early election, perhaps she also wants to remove the stigma of being an unelected PM.

All in all, not as surprising as it may seem.

With that in mind, let’s dissect her full announcement and see what substance it actually contains.

First, her claim that the current Government has delivered “Certainty, stability and strong leadership.” Has it? There seems little by way of concrete plans for delivering Brexit, nor anything especially precise on UK negotiation strategy for actually leaving the European Union.

Hardly stability or certainty. The country is at its biggest crossroads since joining the EU (or EEC and Common Market as it was then) and now our unelected caretaker PM wants us to believe that all is under control with little evidence to back that up. Despite, according to May’s announcement:

We have also delivered on the mandate that we were handed by the referendum result.

How? The UK hasn’t formally left the EU yet. Nor do we seem to have a concrete departure plan. Nor does our impending departure imply stability when, if anything, a period of outright instability is infinitely more likely.

We want a deep and special partnership between a strong and successful European Union, and a United Kingdom that is free to chart its own way in the world. That means we will regain control of our own money, our own laws and our own borders and we will be free to strike trade deals with old friends and new partners all around the world.

That makes the gigantic assumption that other countries see us as a good bet without favourable trade links with the EU. It also assumes they’ll want to strike deals with us in general. When the UK initially entered it did so partly by junking existing trade deals with many Commonwealth countries. They’re unlikely to have forgotten being thrown over for an organisation May now proposes to walk out of.

Let’s also not forget May’s desire to ‘regain control of our own laws by ditching the European Convention on Human Rights, a set of laws providing protection for many of the weakest and most vulnerable in British society. A set of laws promoting equality and fairness to sections of the population that previously enjoyed little of either.

May also blasts Brexit’s opponents within Labour, the Liberal Democrats and Scottish National Party as though they will be to blame if Brexit turns out badly. She comes across as though wanting to give an excuse in advance, then wag her finger afterward saying ‘I told you so – Brexit went badly because of wreckers and opponents, not in the seeming absence of coherent strategy or a willingness to negotiate instead of providing bullish rhetoric and little else.’

Not what many might consider strong leadership, preparing excuses in advance of a potential failure.

May’s rhetoric on the snap election doesn’t imply a mature, grown-up plan of diplomacy and genuine negotiation, either. May clearly wants to steal a march on the EU, the very people she has to negotiate with. To quote her exactly:

We need a general election and we need one now, because we have at this moment a one-off chance to get this done while the European Union agrees its negotiating position and before the detailed talks begin.

Possibly somebody should have reminded her that an important part of negotiations on anything is good faith. Openly looking for an edge over the EU before talks have begun hardly implies good faith. It doesn’t imply common sense or discretion, either.

May’s announcement, of course, is really a request. The Fixed-Term Parliament Act requires a two-thirds majority to permit an early election. May knows it and so does Parliament. That said, if May’s bullish, aggressive attitude is the same towards Parliament as it seems toward the EU, then a vote against is unlikely.

The bigger test facing Labour is its internal division. Already Tom Blenkinsop has announced he won’t stand for election as a Labour MP under Corbyn’s leadership. More Blairites and MP’s from the Labour right may follow him. If so, perhaps May’s decision might start the right-wing exodus from Labour that many on Labour’s left have argued for.

Corbyn’s poll figures aren’t good and May’s are better. The Liberal Democrats are gaining a little ground, but not as much as they’d like overall. Conventional wisdom says that the chances of a Labour victory are far slimmer than Labour would like.

That said, polling figures for the 2015 election didn’t prove reliable. Relatively few people expected Corbyn to even become Labour leader. Fewer still expected him re-elected with an increased majority. The wailing and gnashing of teeth from the right-wing Labour lobby was palpable.

Which raises an interesting question. If Corbyn manages a Labour victory despite plotters within Labour, a hostile mainstream media and the customary electioneering of the other parties, where would his critics be then?

Probably wiping much egg off many faces.

Speaking of eggs and faces, it hasn’t taken long for May to get some on hers. Within hours of announcing the snap election the thorny subject of live television debates reared its ugly head. While the mainstream media often seizes any opportunity to lambast Jeremy Corbyn for his performance at Prime Minister’s Questions, May isn’t comfortable with live debates and has refused to take part in them.

Corbyn, on the other hand, has been taking a tougher line with other politicians and the media. He was open about wanting the debates, stating publicly;

I say to Theresa May, who said this election was about leadership, come and show some.

This might have something to do with the steady improvement in Corbyn’s PMQ performance and May’s corresponding decline. May simply isn’t that personable a politician and it shows. Corbyn has a warmth that she lacks and, while he personally doesn’t poll as well as hoped for, his policies are actually very popular.

Live debates have been tried before in 2010 and 2015 and proved engaging to voters. May’s lack of engaging with the public is an Achilles Heel for her. It’s less of a problem for Corbyn, an intelligent debater with personal warmth and a reasoned manner. Corbyn would probably benefit from debating publicly with his rivals while beaming his message direct to viewers, listeners and voters.

This is probably what May and his other foes are most afraid of. It would suit him to largely brush aside a hostile mainstream media and talk directly to the public. Largely cutting out a hostile middleman plays right into his hands.

May has so far avoided giving any substantial reason for refusing to take part. A Tory spokesperson merely parroted her line on strong, stable leadership, stating;

The choice at this election is already clear: strong and stable leadership in the national interest with Theresa May and the Conservatives, or weak and unstable coalition government led by Jeremy Corbyn.

This, not surprisingly, met with derision from other party leaders and on social media. May’s election announcement was both bullish and provocative. She then turned tail and ran from something she isn’t at all good at and doesn’t want to do. Or, for fans of Monty Python, it’s a case of;

Lib Dem leader Tim Farron, among others, has suggested that the debates should go ahead with or without May’s presence. A growing lobby agrees, suggesting May should be ‘empty-chaired’ and it made clear that she could have participated and refused to. Whether this would be acceptable under the Representation of the People Act is another matter.

If she has the chance to debate live and declines, voters may well regard that similarly to juries when defendants or witnesses refuse to give evidence. They’ll probably draw their own conclusions unlikely to favour May. It would also antagonise the mainstream press whose ability to attack Corbyn’s alleged shortcomings (while glossing over May’s) will be limited for the campaign’s duration. 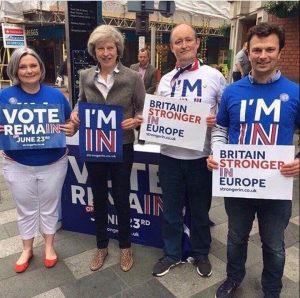 Whether May will continue to duck live debates, especially if other contenders participate and take advantage of her refusal, is debatable. She might find herself having to bite the bullet and do them anyway. After all, she was previously in favour of staying in the EU and opposed to an early general election as well.

Will the arrival of June be the end of May?

Only time will tell…