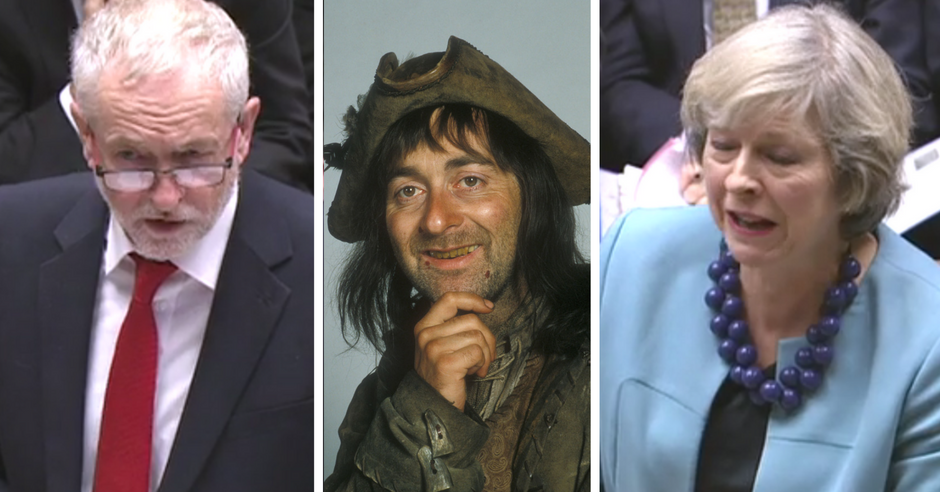 Week after week, Theresa May seems completely unable to answer Jeremy Corbyn at PMQs. Today’s session was no exception, with Corbyn making damaging points about May’s excruciating lack of clarity or detail regarding the biggest political issue facing Britain today: the terms of Brexit.

The mainstream media has, as usual, decided to attack the leader of the opposition, despite May’s exceptionally weak performance.

Corbyn probed the Tories’ total lack of clarity over Britain’s departure from the EU, as well as Theresa May’s consistent inability to ever actually answer a question, by comparing her to one of the ‘great philosophers’: Baldrick from Blackadder.

Pushing May to deliver some actual answers on Brexit, the Labour leader asked:

On Monday, you told the House, ‘We have a plan which is not to set out at every stage of the negotiations the details’.

I’ve been thinking about this for a couple of days. I think when you’re searching for the real meaning and the importance behind the prime minister’s statement, you have to consult the great philosophers.

The only one I could come up with is Baldrick, who says, ‘Our cunning plan is to have no plan.

May’s response was a complete evasion of the point, instead mystifyingly attempting to link Baldrick’s comical ineptness with the Labour Party.

I’m interested that the right honourable gentleman chose to support Badrick, of course the actor playing Baldrick was a member of the Labour Party as I recall

May wasn’t the only Tory to miss the point of the Baldrick remark, as this Tweet from the Telegraph’s Asa Bennett shows.

#pmqs Baldrick on the agenda. Corbyn cites his "cunning plan" line to attack Brexit. May notes he is quoting @Tony_Robinson, a Labour member

Asa I hate to break it to you and Mrs May, but Corbyn wasn’t quoting Tony Robinson, he was quoting a fictional character that Tony Robinson plays.

Tony Robinson the ACTOR that plays Baldrick decided to chip in and clarify his position on Baldrick.

He later confirmed – owing to doubts surrounding whether or not he quit the party – that he is indeed still a member of the Labour Party.

Just to clarify, I am still a member of the Labour Party. 40 years and counting #coregroupturnip

However we still don’t know which political party Baldrick lends his support to. Perhaps Asa could use his journalistic prowess to clarify this for us one day?

After the Baldrick remark, Corbyn continued to press May for answers over Brexit

May responded in her usual vague and evasive manner:

Yet another PMQs where May failed to provide any solid or useful answers.

May is starting to develop a reputation for political vagueness, bordering on the Trump-esque, as an astute Twitter user pointed out.

How long until May starts telling us she wants to make Britain great again? I shudder to think.

Corbyn then went on to question the PM about the Government’s involvement in the ongoing Yemen crisis.

Asking if she would discontinue support for Saudi Arabia as a member of the UN Human Rights Council, given that they are a world leader in human rights abuses.

May failed to provide any answers to the questions, and said the the government are seeking to work with the Saudis to find a “political solution”.

Despite the fact that May never answers questions, and has consistently failed to provide a clear strategy for Brexit, the mainstream pundits still thought the PM came out on top in today’s PMQs.

Instead of focusing on what Corbyn did ask, many mainstream pundits attacked the Labour leader for not questioning her about this morning’s leaks regarding speeches she made to Goldman Sachs prior to Brexit.

Corbyn missed open goal to destroy May after she warned Goldman Sachs that Brexit would be disaster. She won #PMQs by default

And, presumably if Corbyn had used his allotted questions to focus on May’s leaked speeches, the very same pundits would probably be asking why he’s not asking more pressing questions about the real issues of today. Y’know, like Brexit.