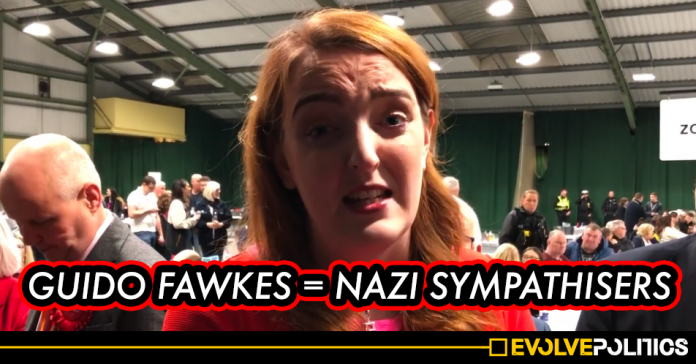 The pro-Tory smear merchants, Guido Fawkes, have been slammed on social media after defending neo-Nazis and arguing that a Jewish Labour MP should be nicer to them.

Before she was elected as the Labour MP for Warrington North, Charlotte Nichols posted a tweet referring to a video of Italian neo-Nazi football fans marauding through the streets of Glasgow doing Nazi salutes.

Nichols, who is Jewish, wrote:

“I hope every single one of them (Nazis) gets their heads kicked in by the good folk of Glasgow.“

I hope every single one of them gets their heads kicked in by the good folk of Glasgow. https://t.co/5JXSofOdnV

Nichols has repeatedly defended her comments, telling the BBC in December that:

“These were people doing Nazi salutes on the streets of Britain. As a Jewish person whose grandfather fought in World War Two, ultimately sometimes I believe that fascism has to be physically confronted.”

“Frankly this idea that I should apologise for saying that these people should be dealt with, you know I think sometimes fascism has to be physically confronted.”

However, following her latest comments, the pro-Tory Guido Fawkes blog posted an article defending the fascists and arguing that Ms Nichols should be nicer to them.

Gudio Fawkes were also heavily criticised for initially describing the Nazis as merely “Italian tourists” – a description which has since been removed from the article.

“Of course, right wing rag Guido refers to Lazio fans doing Nazi salutes on the streets of Britain as “Italian tourists”. My granddad didn’t risk his life in WW2 to beat fascism ‘in the marketplace of ideas’ and as a Jewish person I’d rather drop dead than apologise to Nazis”

The vast majority of social media users rallied behind Nichols’ stance, with many criticising Guido Fawkes for appearing to take the side of Nazis:

Guido Fawkes: we care very much about opposing antisemitism.

She is a Jewish MP saying she would kick Nazi heads in – what is the issue here?

It's so transparent that Guido Fawkes was so vocal on Labour antisemitism – yet when a Jewish Labour MP says she'd beat up a Nazi they're presenting it as alarming. https://t.co/V4WXbtS2Zc

A Jewish person saying they wanted to kick some Nazis' heads in (before they were an MP) is the most pathetic gotcha. Guido's slam dunk is the description of Lazio's fascist ultras as "Italian tourists." https://t.co/aF2Si2Vbyf

Jewish MP thinks fascists giving Nazi salutes, whilst marching through the streets of the UK should be forcibly removed from them.

Wait until he finds out what our grandparents did to Nazis. https://t.co/vyNQSPzO1E

Guido continues to favour fascism over those willing to confront it. https://t.co/bFBDKqv9Lj

The Guido Fawkes blog has close links to the Conservative Party and – despite repeatedly publishing false information – is regularly cited by the BBC as a legitimate news source.

And following their article today – in addition to their litany of fake news – Guido Fawkes can also now be described as outright Nazi sympathisers.