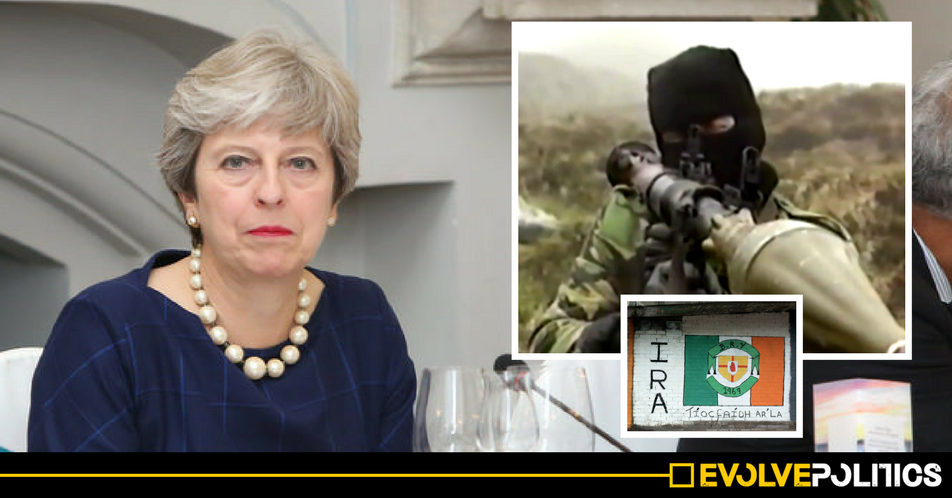 While the mainstream media focuses on Jeremy Corbyn’s alleged “support” for the IRA, it is conveniently ignoring a Conservative politician who actually used to be a member of that very organisation, and even said that “I agreed with the shooting of British soldiers and believed the more who were killed the better.”

Following last week’s release of their shambolic manifesto, Theresa May’s poll ratings have taken a significant slump in the past couple of days. To accompany this downturn we’ve see the Tories’ loyal attack dogs in the media attempting to smear the opposition with anything they can get their hands on.

This morning on Sky, Sophy Ridge conducted an interview with Corbyn that focused intensely on the Labour leader’s history with the IRA. Despite Corbyn condeming the violence carried out by both sides several times during the interview, the media have somehow decided that Corbyn ‘refused to condemn’ the IRA. Despite the fact he literally did

Aside from the media’s twisting of Corbyn’s words, there is another prime example of its blatant hypocrisy for all to see. Because a sitting Conservative Party councillor actually used to be a member of the IRA.

.@jeremycorbyn​ was asked if he condemns the IRA by @SophyRidgeSky. He said he condemns "all bombing" #Ridge @SkyNews pic.twitter.com/XktEziX6UB

Maria Gatland is a Tory councillor in Croydon, South London. But in a previous life she was known as Maria McGuire; a member of the Provisional IRA and lover of one of it’s top dogs David O’Connell. She detailed her life in the group in a book called To Take Arms: My Year With The IRA Provisionals. And she pulled no punches in describing just what she was involved in.

As The Belfast Telegraph documented in 2008, Gatland went on an arms-buying mission with O’Connell to the continent. It reported that:

O’Connell took her to the Continent on an abortive mission to buy modern arms to replace old equipment. The old stuff would malfunction during gun battles, which she said was ‘particularly annoying for the really good snipers’. Their travels took them to Zurich, Brussels, Amsterdam and Paris, but they constantly felt they were being followed. In France, McGuire wrote: ‘At one period I thought seriously about using my gun on one of our shadows’.

But after their cover was blown by a British newspaper, they were forced to flee back to Ireland. Even after Gatland admitted in a press conference that the pair were trying to buy weapons for the IRA, they were still not arrested.

She also said in the book:

I remember occasions where we heard late at night that a British soldier had been shot and seriously wounded in Belfast or Derry and we would hope by the morning he would be dead.

I accepted the bombing of Belfast and when civilians were accidentally blown to pieces dismissed this as one of the unfortunate effects of urban guerrilla warfare.

A change of heart

But Gatland soon began to realise that she was being “very naive”. And after the Bloody Friday bombings, when up to 22 bombs were detonated in Belfast in just over an hour, killing 11 and injuring 130, she left. Gatland said:

I was very concerned about what was happening to my country and believed joining the IRA was the way to do something about it. I began to realise it wasn’t something I wanted to be involved in and so I left. I realised violence was not the answer and I now abhor violence.

But according to The Daily Mail, her links with the IRA were only exposed because she was accidentally called “Councillor McGuire” at a Croydon council meeting. Therefore, forcing her hand to reveal her past. At the time, in 2008, she resigned as education chief of the Conservative-run council, and considered leaving the party entirely – but never actually did.

She currently sits on the Shadow Shadow Cabinet for Children, Families & Learning. Gatland said of her time in the Provisional IRA and rise to Tory councillor:

I wanted to put something back into the community and I think I have done since I was elected to the council. I deeply regret that I have caused problems for my colleagues who I hold in very high regard

Gatland appears to have renounced her past with the IRA, and obviously this has satisfied her peers and bosses in the Conservative Party, as she is happily still representing them. But no such treatment is given to Corbyn – even though any contact he had with the IRA was in the context of the peace process in Northern Ireland.

Gatland’s past and her ascension to some height in politics shows the utter hypocrisy at the heart of UK politics and media. While it is seemingly OK to support and be actively involved in terrorism if you’re a Tory, trying to instill a lasting peace in one of the most troubled parts of the world, if you’re a left-wing Labour politician, condemns you for the rest of your career.