Home UK News Economy The right-wing press are LYING to you about Labour’s ‘Land Value Tax’.... 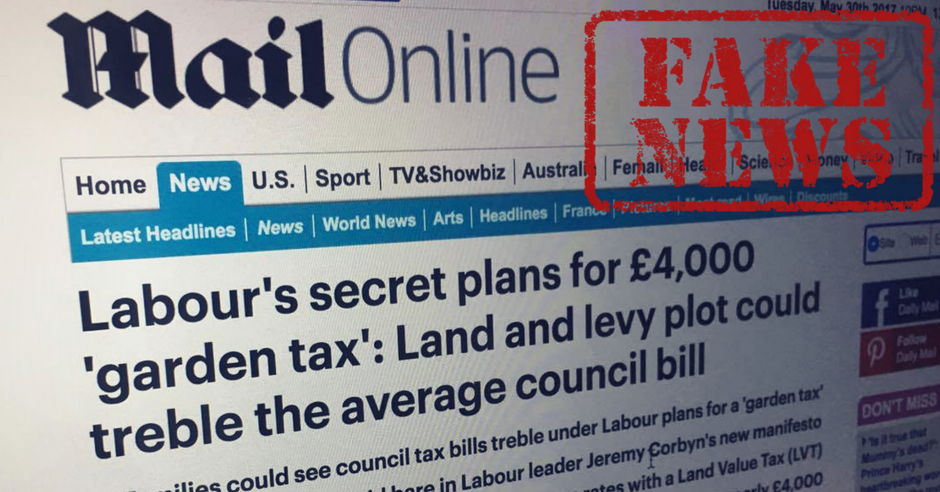 You will probably have noticed a lot of stories in the media about a ‘land value tax’ that Labour are said to be keen on implementing, should they be elected on June 8th.

All of these stories are based on one single line of text from the 2017 Labour manifesto – a line which simply states that Labour would ‘consider new options’ to reform council tax and business rates such as a Land Value Tax.

Some outlets have even tried to describe how this policy is seemingly hidden in the ‘small print’ of the manifesto. The truth is that Labour’s manifesto is fully searchable online and contains absolutely no ‘small print’ whatsoever! (see below)

What is a land value tax?

Land value tax is exactly as it’s described – a tax based on the value of the land you own – regardless of the value of any structures built on it. It would be a direct replacement for council tax and business rates, meaning that renters, and those who do not own their own property, would see their council tax bills disappear altogether.

People who do not own land would not have to pay a single penny of this tax, and would therefore see a large reduction in their bills due to the scrapping of council tax.

The argument could be made that landlords would attempt to offset this increase in tax onto their tenants, but with Labour’s proposal for controls on rent rises, this would make it almost impossible for landlords to get away with.

Furthermore, because the Land Value Tax would be based on the rental value of the plot owned, any landlord who wanted to increase the rental price of their property would also be increasing their own tax bill in the process.

Would it mean higher bills for ordinary homeowners?

It depends on the value of the land, and the amount of land you own.

The rate for people owning just one residential plot would be set at around 0.85% of the value of the unimproved land. This would mean that someone owning an plot worth £110,000 (regardless of the value of any structure built upon it) would pay just £935 per year in Land Value Tax – almost certainly a large reduction on their current council tax bill.

The higher the value of your plot of land, the higher your land value tax bill will be. But as long as you only own and reside in one property, you will only be required to pay the standard rate of 0.85%.

However, those owning second homes, landlords with rental property portfolios, and owners of commercial or industrial property, would be liable to pay a higher rate of Land Value Tax – set at around 3% of the value of the property. The idea of this higher rate is to encourage land owners to make productive use of their land to cover the costs of the tax, or sell to someone who would make better use of it.

A land value tax would also deter investors from hoarding vacant properties, or buying land purely in the hope that its value will increase in the future.

The Tories and their loyal minions in the right-wing press have attempted to spin this tax as a ‘garden tax’, but this is, once again, complete and utter nonsense. It has absolutely nothing to do with the size of your garden, but the value of the property as a whole.

Who would pay more under a Land Value Tax?

Essentially, a land value tax would mean that those with large property portfolios would be expected to stump up more in tax for each plot they own, whilst significantly reducing the burden of council tax on those less able to pay it.

There are two main reasons why the right-wing press and the Tories are so against this form of taxation:

What do economists say?

The Land Value Tax has been supported by a huge number of economists throughout history, right up to the modern day. Adam Smith said of it: “nothing [could] be more reasonable”, whilst Milton Friedman said it was the ‘least bad tax’. Even the notoriously conservative Institute for Fiscal Studies (IFS) has backed a land value tax!

The Land Value Tax is seen by economists as an inherently fairer way of taxation. Land values generally rise with improvements to local infrastructure, and this infrastructure is paid for through taxation. Therefore the implementation of a Land Value tax would mean the subsequent uplift in wealth would flow into the community, rather than purely to the individual owning the land which has seen its value increase due to these improvements in infrastructure.

If you’re a private renter, the introduction of a Land Value Tax would see your bills decrease substantially due to the scrapping of council tax.

If you own a single residential plot up to the value of around £120,000, you will certainly see a reduction in your bills.

If you own a single residential plot worth between £120,000 and £250,000, there will be no substantial increase to your tax bills based on the value of the land – regardless of the value of the property.

[The same theory would apply to those renting commercial property as Land Value Tax would also replace Business Rates.]

However, if you own a second home, or own a vast property empire, you will see an increase in tax based on the amount of property you own and its value.

With all this being said, Labour have only mentioned the Land Value Tax in a single line in their manifesto as an option they are looking into. An option which is highly popular with economists, and has already been successfully implemented in places like Denmark – a socialist democratic country that leads the charts for happiness across the globe.

But once again we see the right-wing press completely misrepresenting an idea that could see their already super-rich billionaire owners taxed a little more, and spin it to try and scare their readers into voting against their own best interests.

This article has been updated to reflect the fact that the amount of Land Value Tax owed would be calculated solely on the value of the plot of land, regardless of any structure built upon it. Please follow this link to our correction article for more information.