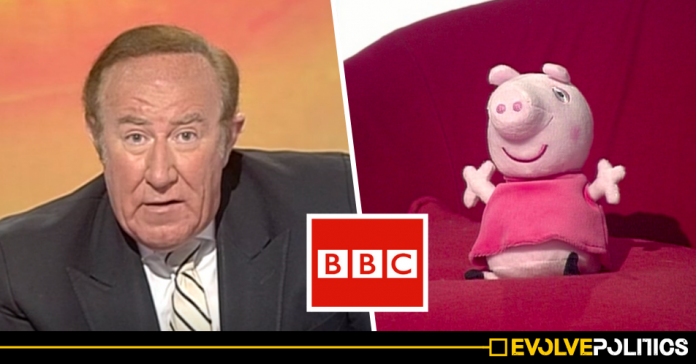 BBC Presenter Andrew Neil gave the infamous ’empty chair’ treatment to the Labour Party after they failed to follow through on promises to provide a Minister for an interview in the run up to the 2010 General Election.

Despite the BBC’s history of giving the empty chair treatment to Labour, the UK’s public broadcaster is steadfastly refusing to give the same treatment to the Prime Minister Boris Johnson after he cancelled plans to take part in a crucial pre-election interview with Mr Neil.

In April 2010, just weeks before the General Election which ended 13 years of Labour government and ushered in the Tory-Lib Dem coalition, the Labour Party reneged on promises to provide a Minister to appear on the BBC’s Daily Politics programme.

However, rather than simply continue the show with the rest of the panel, the BBC decided to place a Peppa Pig teddy bear on the seat reserved for the Labour representative.

The presenter Andrew Neil then proceeded to direct questions intended for the absent Labour Minister at the Peppa Pig teddy.

You can watch a snippet of the 2010 footage in the tweet below:

Months before the 2010 general election the BBC's Andrew Neil empty-chaired Labour and replaced them with 'Peppa Pig'.

The BBC also promote the 2010 empty chair incident in a 2015 video article explaining what the empty chair treatment is.

Despite their history of using the empty chair treatment for Labour, the BBC are reportedly unwilling to give the same treatment to the Tory Prime Minister Boris Johnson.

The Labour leader Jeremy Corbyn, Lib Dem leader Jo Swinson, and Brexit Party leader Nigel Farage have all taken part in grillings with Mr Neil in the run-up to the 2019 General Election on December 12th.

However, despite the BBC reportedly assuring Labour that they had secured pledges from all party leaders to take part in the interviews, Boris Johnson decided to chicken out shortly after Jeremy Corbyn’s interview aired.

Despite saying he is more than happy to be interviewed by “any BBC presenter named Andrew” on last week’s Andrew Marr show, Boris Johnson has still not agreed a date to be interviewed by Mr Neil – and it is widely understood that the PM has decided against taking part entirely.

Following the news that Johnson had chickened out, numerous calls for the BBC to ’empty chair’ the Prime Minister were made – some of which went viral on social media.

The BBC still have seven days to do the right thing and empty chair Boris Johnson, solo, for a full half hour. Nothing but @afneil solemnly asking the questions he’d like to ask the Prime Minister, with 30 seconds of silence after each one.

However, despite giving the same treatment to a Labour MP in 2010, the BBC are understood to be firmly against using the empty chair treatment on Mr Johnson.

It has also just been announced that Johnson has pulled out of a scheduled interview with ITV.

NEW: ITV News has just told me Boris Johnson will NOT be taking part in an interview with Julie Etchingham

ITV said: "Every other leader of Great Britain's main political parties that has been approached has done an interview for Tonight" @julieetchitv