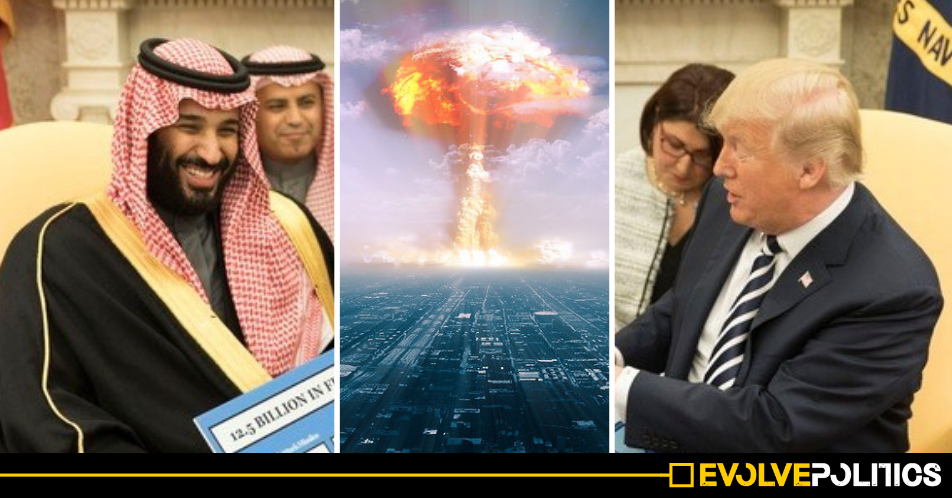 In case you hadn’t heard, Donald Trump has been exposed authorising a potentially illegal multi-billion dollar deal to sell highly sensitive nuclear secrets to Saudi Arabia – a decision which, experts say, has the very real potential of allowing the world’s biggest state sponsor of terrorism to manufacture a nuclear weapon. Yes, seriously.

Earlier this week, it was revealed that the United States Department of Energy had signed off authorisations allowing at least six American companies to divulge nuclear secrets and provide assistance in the development of nuclear energy to the Saudi Arabian dictatorship.

The deal was completed despite the Saudi regime consistently refusing to sign off on internationally mandated legal agreements which would prohibit it from using the technology to develop a nuclear weapon.

Moreover, it has also emerged that several independent agencies with whom the US government are supposed to inform and liaise with regarding decisions over the release of sensitive nuclear information were not consulted beforehand.

In addition, despite being obliged by the 1954 US Atomic Energy Act to gain Congressional approval for such a move, the Trump administration kept the multi-billion dollar deals secret from Congress.

A preliminary inquiry based on testimony from multiple whistleblowers, launched after rumours of initial negotiations between the US and Saudi Arabia emerged in February, has suggested that the secrecy surrounding the operation could indicate corruption and a potential desire to monetise the Trump presidency.

The goal of the inquiry was “to determine whether the actions being pursued by the Trump administration are in the national security interests of the US or, rather, serve those who stand to gain financially“.

The inquiry went on to state that it was “particularly critical because the administration’s efforts to transfer sensitive US nuclear technology to Saudi Arabia appear to be ongoing“, before going on to warn that:

Evidence obtained by the report also documents that Donald Trump held talks on February 12 with “nuclear power developers” about the potentil of sharing nuclear information with the Saudis, and also noted unconventional and highly secretive meetings between Trump’s son-in-law and Middle-East envoy, Jared Kushner, and the Saudi dictatorship.

The Saudi regime has repeatedly stated their desire to develop nuclear weapons, with Turki al-Faisal, a senior member of the House of Saud, claiming that the Arab State should be capable of equal nuclear “know-how” with Iran and would seek foreign assistance to have its own nuclear weapons in the event of Iranian possession of nuclear weapons.

Furthermore, the Crown Prince of Saudi Arabia, Mohammad Bin Salman, stated as recently as 2018 that “without a doubt, if Iran developed a nuclear bomb, we will follow suit as soon as possible“.

Following the exposure of the US deal, satellite images obtained by Bloomberg revealed that Saudi Arabia was already nearing the completion of its first nuclear reactor at a site in the King Abdulaziz City for Science and Technology in Riyadh.

Saudi Arabia signed up as a member of the Nuclear non-proliferation Treaty in 1988, and agreed a comprehensive safeguards agreement with the International Atomic Energy Agency (IAEA) in 2005. However, at the same time, the Arab State also signed a so-called ‘small quantities protocol’ (SQP) – an agreement designed for countries with negligible quantities of nuclear material which exempts them from facing regular inspections.

Following Saudi’s peculiar decision to declare SQP status, the IAEA chose to strengthen the oversight of SQP agreements to make them far more rigorous – changes which Saudi Arabia has never accepted, meaning they are still legally exempt from inspections.

Despite the fact they have the second largest reserves of oil anywhere in the world and potential solar energy in abundance, Saudi Arabia claim they need to develop nuclear energy to power their grid.

In order to legally obtain the material needed to power the 16 proposed nuclear reactors, Saudi Arabia would first have to agree to scrap their SQP agreement and sign up for regular inspections.

However, in March it was revealed that Saudi Arabia had instigated a national cadre development program to explore and then mine uranium themselves.

Given Saudi Arabia’s scant disregard for international law – whether it be the numerous atrocities committed in Yemen, or their utterly barbarous assassination of Jamal Khashoggi at the Saudi Consulate in Istanbul – it would be foolish to dismiss the potential of the Arab State acquiring nuclear materials by whatever means necessary.

Given the fact that Saudi Arabia are widely regarded as the world’s largest funder of terrorism, and are known to support many of the aims and actions of ISIS, it is far from inconceivable that nuclear material, and the technology to unleash its full ferocity, could now – as a direct result of Trump’s extraordinarily dangerous dealings – end up in the hands of an even more murderous organisation than the House of Saud.

What could possibly go wrong?