It appears Theresa May’s attempt at being funny has backfired spectacularly. In what was meant to be a comical rebuttal to Jeremy Corbyn’s crowdsourced questions, May read out a tweet mocking him from a user called Lewis Collins, who many on social media have described as a ‘racist’.

Whilst May’s quip raised a few sniggers in the Commons at the time, Evolve Politics can confirm that the Prime Minister’s staff ought to have done a little more research into who they are associating themselves with.

The account in question has some questionable content to say the least. Not only does Collins claim that when a Polish person is attacked it “will always be considered a Brexit hate crime”, but he has also posted controversial content about Black Lives Matter and the murder of the late Jo Cox MP. 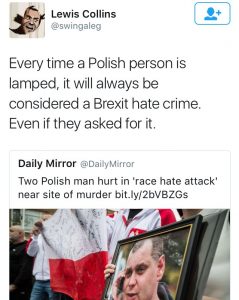 Moreover, he has also directed vile tweets aimed at Labour MP Jess Phillips and journalist Elizabeth Day, whom he labelled a “stupid feminist piece of sh*t”.

It is beyond belief that the first female Prime Minister in decades is more than happy to give a platform to somebody who holds racist and sexist views, even more so when it was to score a cheap political point. What is clear is that May and her team were so obsessed with trying to make Jeremy Corbyn look bad – they have actually succeeded in making themselves look even worse.

Politicians should be very careful when quoting Twitter accounts. May’s staff will clearly be checking previous tweets if they ever try an empty-headed stunt like this again. 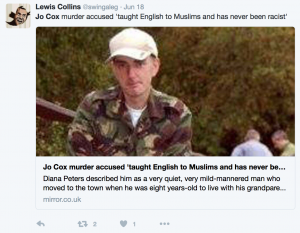 Oh, and then there’s this one: