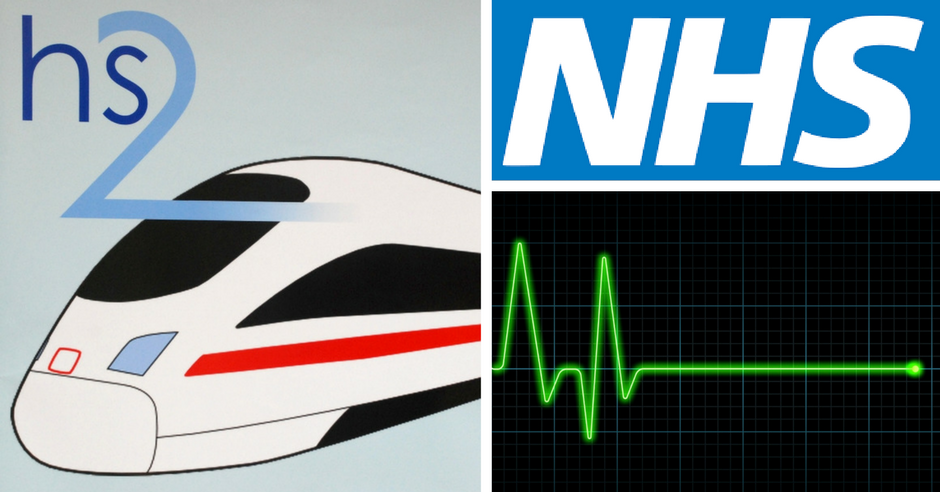 Back in the days before everything had an ‘i’ in front of it one of the things that kids begged Santa for was a train set.  They usually came with a length of circular track and you set your little locomotive on it and watched it go round and round and round to your heart’s content.  It was one of those things that you were excited about on Christmas morning but bored with by Boxing Day.

I wonder if David Cameron ever had a train set when he was a child.  I’d imagine him as more interested in playing with a toy bank set that his financier father may have bought him.  Probably one with the secret compartments hidden under the game board where you could stash secret piles of monopoly money and later claim you had no idea anything was in there.  Teach your children well, as the saying goes.

I imagine the lack of a train set may have driven Cameron’s unerring support for HS2.  A mind numbingly expensive project that will probably be about as useful as that bit of plastic and tin from my childhood and a lot less fun for the rest of us.

Although originally started by Labour in 2009, HS2 quite obviously became Cameron’s legacy project.  Something he wanted to be remembered for, and for a while it seemed like that would be the case, but not in a good way.  As plans were drawn up to cut huge swathes through towns and villages across the country, ignoring objections from people who were quite happy with their back gardens without a railway siding running through them, objections rose to a crescendo.  Even staunchly Tory areas raged against the project and more and more money was spent on looking for ways of not upsetting the voters of middle England.

Ultimately though, what should have gone down in history as the largest display of pointless hubris since King Canute’s followers turned up for a day on the beach without their wellies, was eclipsed by Dave’s other spectacular miscalculation – the EU referendum.  Yet it’s looking likely that HS2 will cost even more than that bit of daftness.

Current estimates of cost to the UK economy for facilitating our departure from the EU run to around £50bn, although of course it’s early days on that one and the figure may grow.  It also excludes the economic impacts which of course are still being hotly debated.  But the figures for HS2 seem to be just as moveable.

Original estimates on project stood at £30bn in 2010 but had almost doubled to £56bn by 2015, although it’s been rumoured that The Treasury have always assumed the final figure would be more in the region of £80bn.  Now a letter from Luton North MP Kelvin Hopkins to the campaigning group Stop HS2 has brought to light news that :

“Leaks from inside the HS2 bureaucracy suggests the total cost of HS2 will be over £200 billion.”

According to Stop HS2:

Other information has come to light to show that the way the government has been estimating the costs is flawed and uses outdated methodology.

Last year, rail consultant Michael Byng, who produced new methods of estimating costs for Network Rail, applied those methodologies to the HS2 project and came up with an estimate just to build Phase 1 of HS2 of £53.6bn.  This was almost as much as the government estimate to build the entire project and provide the rolling stock.

Costs increases from £50.1bn to £55.6bn were confirmed in last year’s Autumn Statement, ostensibly as a result of inflation.  However an FOI request showed figures for Phase 2 had actually gone up by 39.2%, with the final number being finagled by reducing the estimate for the cost of rolling stock.

It’s difficult to see why the government continues to pursue this project in the face of mounting disquiet from most of the country.  Even people who won’t be directly blighted by the plans fairly consistently question the wisdom of throwing boatloads of cash at something that has such a limited benefit.

In its early stages the requirement for a 15 minute shorter journey to Birmingham was roundly ridiculed as the antithesis of the cost/benefit equation.  Whilst many saw this as another jibe at our second capital city, others pointed to the fact that things have changed since the opening of HS1 in the early part of the century.

So much more business is carried out on the move these days that journey times are not so crucial.  Even if a trip takes an hour longer, that hour is being put to good use with on board Wi-Fi connected to laptops, tablets and phones.  Indeed it’s long been proposed that a better use for the money being poured into HS2 would be a comprehensive country-wide fibre optic network, such as those now in place in other countries.  Such a scheme was in fact started in 1990 by BT but was then cancelled by the Thatcher government on the grounds of cost and monopoly putting back the UK’s data infrastructure by 20 years.  Apparently Maggie wanted American cable companies to provide the service to increase competition.

And there I think we have an inkling into why HS2 is still ploughing on regardless of common sense and public opinion.  Lobbying by some major corporations set to make billions out of the project have their snouts well and truly in the trough.  In keeping with most government procurement practices, cost controls with major contractors are an absolute joke.  But HS2 Ltd has taken this to a new level with reported overspends on contract tenders of 86%.

An investigation into HS2 costs carried out in 2013 discovered that the Civil and Structural Design Services contracts were running 18% over budget. This figure rose in 2014 to 53%. Railway systems contracts were 60% over budget, whilst land referencing and environmental services were both over double their estimated costs, at 108% and 150% respectively.  In 2014 it was revealed that a set of professional services contracts valued at £101m had come in 86% over-budget at £188m.

The latest example of this complete incompetence with our money comes from CH2M Hill – the firm that current HS2 Ltd boss Roy Hill is on secondment from.  When their contract was awarded in 2012, it was valued at £70m, but it has been revealed the company has been paid £104m, a 49%, £34m overspend.  So much for Tory claims of fiscal fortitude or for the mantra that private contractors will always give better value for money that publicly run services.

Over the years, we have seen the costs of HS2 spiral as they constantly make amendments to correct previous mistakes, and they exercise no budgetary control over contractors who seem to have been left to run their own kleptocracy. It has been clear since the outset that HS2 has got this far because the contractors who want to build it have lobbied hard for it, creating an illusionary imperative which has suckered politicians who are too lazy to do their own research and understand the case for this project is completely fictitious

The final stage of the HS2 Phase 1 Bill was put before MPs today (Feb 20th), with Royal Assent expected later in the week. It’s clear that the government has completely lost control of this vanity project and are at the mercy of a feeding frenzy of eager contractors who can spot a nice little earner when they see one. It speaks volumes about the government’s real priorities when, amidst other far more pressing matters, such as the expensive train wreck that many experts believe Brexit is likely to become, desperately needed public funds are being swallowed up by this ever expanding behemoth.

It’s estimated that the NHS will face a £20bn shortfall by 2020, something that could be cleared 10 times over by the projected cost of this unwanted, unnecessary folly.  As hospitals are about to be hammered with yet more cuts in the guise of sustainability, and social care is heading inexorably towards meltdown, there are far better things to spend such an obscene amount of money on than lining the pockets of contractors to build Cameron’s dream train set.