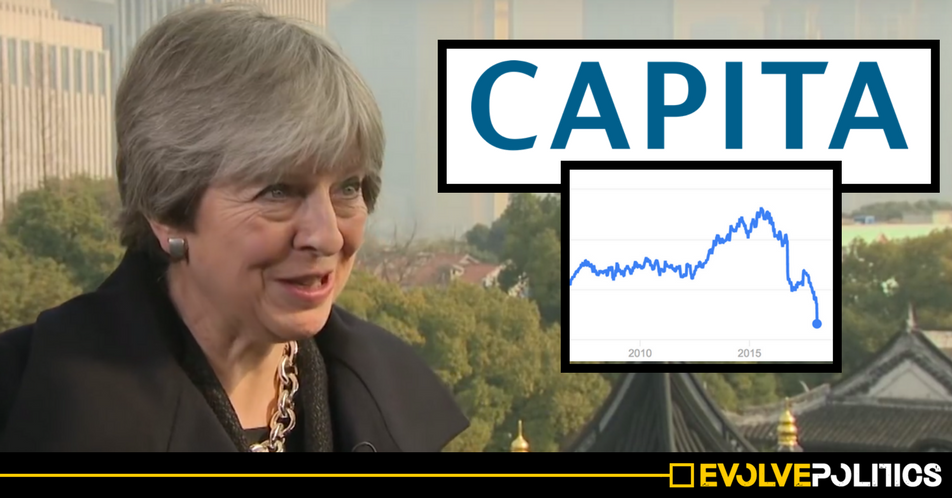 Despite their shares plummeting by almost 50% and having more than £1Bn being wiped off the share price after issuing a profit warning last week, a multi-million pound contract to redesign the House of Commons and the House of Lords has been co-awarded to the financially-precarious private contractor, Capita.

Government documents reveal that the £43m contract was issued on January 30th, and seems to have been pushed through by the Conservatives despite huge questions being asked about whether Capita might be the next private government contractor to collapse after the disastrous plight of Carillion.

Capita have been awarded the work to redesign the two Parliament chambers alongside 3 other private companies, BDP, Pick Everard, and Purcell.

The news comes just weeks after Theresa May’s Conservative government came in for huge criticism after it was revealed that they awarded more than £1.3Bn of contracts to Carillion even after the now-liquidated company had issued the infamous profit warning which led to its eventual downfall.

And now, Capita’s financial situation has become so severe, and the paralels to Carillion so similar, that government Ministers have been forced to hold talks with Capita executives to discuss the likelihood of collapse.

Added to the collapse of Carillion and major worries about the financial viability of Capita, yet another preferred government contractor, Interserve, have severe financial worries after their debt almost doubled from £274m in 2016 to £513m at the end of 2017.

Furthermore, just yesterday it was revealed that 30 police forces across Britain had been forced to spend millions of pounds of taxpayer’s money to bail out a private forensics firm, Key Forensics Services, after the company collapsed, putting thousands of legal cases in jeopardy.

All in all it’s been a terrible few months for neoliberal ideology. The events of the last few weeks have proved that outsourcing vital public work to private companies is an incredibly precarious way of running things, especially when many of the companies involved appear to be completely and utterly incompetent when it comes to managing their own finances.

Much like the culture of greed displayed by banksters in the run up to the 2008 financial crisis, private government contractors also know that, more often than not, the taxpayer will be forced to bail them out if they fail to live up to their promises.

Outsourcing to the private sector is one of the key components of neoliberal economics, and recent events have proven beyond all reasonable doubt that the only sensible course of action is to take vital public work back in house.