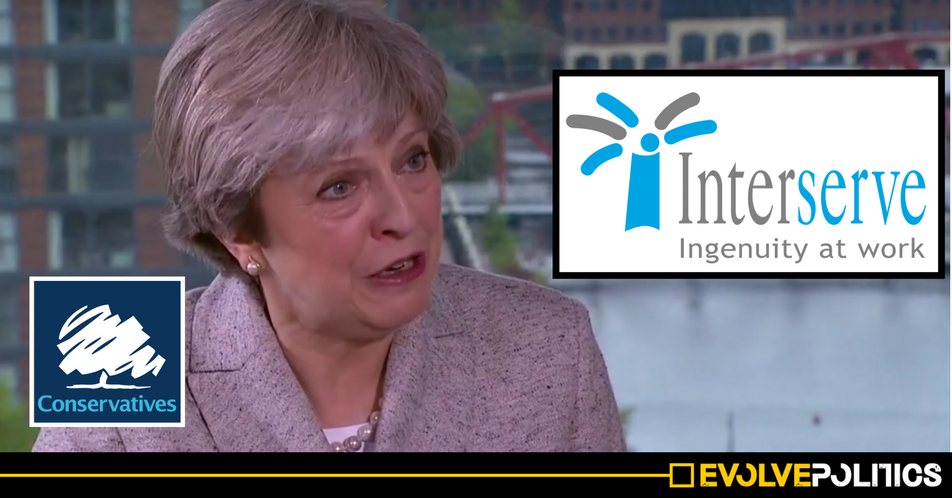 “Doing a Carillion”. This phrase must surely be soon for the dictionaries, defined something along the lines of: “When a corrupt Government piles contracts on to a debt-riddled private-sector contractor until huge swathes of the nation depend on it, and then the corporation suddenly collapses and workers are left unemployed, projects unfinished, pensions in deficit, but executives floating safely overhead under their golden parachutes”.

Today, it appears the Tory Government could once again be stretching its pan-palms out to catch the overspill from the potential collapse of another favoured private contractor, Interserve.

Interserve’s debt almost doubled from £274m in 2016 to £513m at the end of 2017. An underestimation of the costs involved in a public-private partnership contract to provide waste-to-energy services, which saw the corporation raise its provision on one such project in Glasgow from £70m to £195m, has badly affected it.

And in further deeply worrying news, the corporation’s share price has plummeted from 717p in 2014 to just 63p in December, leading to serious discussions with its lenders over the firm’s remaining financial options.

Although the corporation issued profit warnings in September and October 2017, it has announced that it reportedly expects that its 2017 performance was in line with expectations. This, along with the partial recovery in its share price might be due to the fact that the corporation’s new chief executive announced cost cutting measures: £15m in 2018 to £50m by 2020.

With the corporation employing 80,000 people worldwide – 25,000 in the UK – and when it is responsible for public contracts including cleaning, healthcare, security, probation and construction, one wonders what cost-cutting measures will actually involve and how these might impact the provision of essential public services.

Indeed, the corporation is also responsible for operating a range of private-finance-initiative funded schools across Northern Ireland. On top of that, in September 2017 Interserve won a place on the £8bn Homes and Communities Agency Panel to deliver mixed-use and residential buildings on public-sector land with private-sector involvement.

Despite the Cabinet Office setting up a team to monitor Interserve, the Government has insisted that the corporation is no Carillion. An ETX Capital analyst has pointed to the fact that Interserve has won contracts in recent months, including a £140m contract to provide facilities services to the BBC and a £227m contract from the DWP.

The fact remains, though, that so had Carillion. Even as it was being shorted, it was winning contracts. Indeed, asset management company Marshal Wace holds the biggest short position against Interserve on the stock market. The partnership also bet heavily against Carillion before its downfall.

Add to that the fact that it doesn’t matter what reassuring statement the Chief Executive puts out or how much the share price bounces. If Interserve has financially overstretched itself and cannot satisfy its creditors, it’s going down. If it needs to cut the public sector services that it provides to the bone to avoid that, it will.

It is perverse that a private company whose modus operandi is greed, and whose only aim is to simply accumulate profit, can be given so much responsibility over public services.

According to Corbyn, the trumpets of outsourcing’s demise are sounding, as in the coming months we could easily see Interserve do a Carillion.