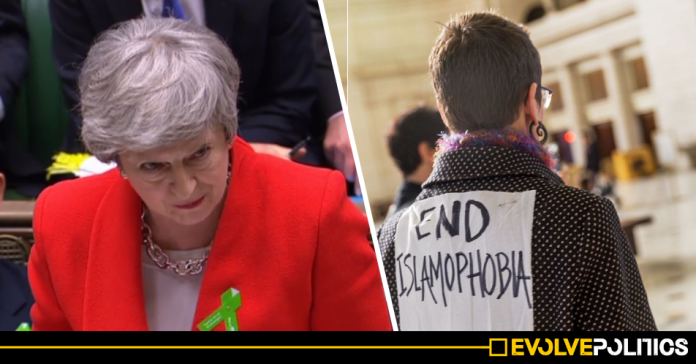 Theresa May’s Conservative Party are set to reject a new and already widely-accepted definition of Islamophobia by arguing that ‘Islamophobia should not be defined as racism because Islam is not a race‘ – an infamous and easily-debunked fallacy widely associated with neo-Nazi thinking.

This Thursday, during a Parliamentary debate on anti-Muslim prejudice, leaked briefings reveal that Conservative Party Ministers will oppose a new definition of Islamophobia put forward by the all-party Parliamentary group on British Muslims.

The definition is endorsed by more than 750 British Muslim organisations, and has already been officially adopted by the Labour Party, the Liberal Democrats, and even the Tories’ sister-party north of the border, the Scottish Conservatives.

The definition simply states that “Islamophobia is rooted in racism and is a type of racism that targets expressions of Muslimness or perceived Muslimness“, and was finally signed off after significant and wide-ranging consultation with legal experts, MPs, and Muslim organisations.

However, leaked briefings obtained by BuzzFeed News reveal that the Tory Communities Secretary James Brokenshire has devised plans to reject the definition on “free speech grounds“.

According to a source familiar with the briefings, the Tories will argue that there are legal difficulties with calling Islamophobia a ‘type of racism‘ because Islam is a religion rather than a race.

The leaked Tory briefings also coincide with warnings issued by police chiefs that the definition could hamper counter-terrorism efforts and impinge on free speech – with Martin Hewitt, the chair of the National Police Chiefs Council, claiming the definition:

“could cause confusion for officers enforcing it and could be used to challenge legitimate free speech on the historical or theological actions of Islamic states. There is also a risk it could also undermine counter-terrorism powers, which seek to tackle extremism or prevent terrorism.”

However, Harun Khan, the secretary general of the Muslim Council of Britain, issued a truly damning response to Hewitt’s claims, stating:

“Anti-terrorist operations can only be ‘hampered’ if counter-terror officers have been targeting Muslims because of their identity (or Muslimness as the definition states), categorising them as security concerns. If this is the case, it confirms long-voiced concerns about the disproportionate focus and impact of counter-terror operations on Muslim communities.

“We would urge Mr Hewitt to carefully reflect on whether, in a climate where there are concerns of discrimination, it is sensible to publicly intervene in this way.”

Whilst it is linguistically true that ‘Islam is not a race’, this does not mean that discriminating against people based on their “Muslimness” or “percieved Muslimness” is not racism.

Indeed, the fact that there have been numerous cases of people from other religions who have been attacked, and even killed, purely for “looking like a Muslim”, proves the case in point:

“Just like traditional racial categories often arbitrarily grouped people of vastly different ancestries and appearances—ex. classifying Ethiopians as “Hamitic Caucasoids” — the Muslim archetype binds together people from the Middle East and the Near East as well as Central and South Asia. It encompasses a variety of ethnic groups, ranging from Arabs and Persians to the Pashtuns of Afghanistan and Desi people of South Asia.

Other cultural markers, like dress and facial hair, serve to solidify this categorization in the public mind and associate Islam with a specific physical type. This has led to a number of hate crimes against non-Muslims, like Balbir Singh Sodhi, a Sikh man who was murdered four days after the 9/11 terrorist attacks.

If you want to be pedantic you can say the killing wasn’t “racist” because he was killed for his religion (even if it was the wrong one) or one could argue that technically speaking, South Asians are considered “white” under US demographic practices, but the fact of the matter is he was killed for his perceived association with Islam based on his appearance.

He was “racially” a Muslim.”

Discriminating against someone simply because of the way they look is the very definition of racism – and the fact the Tories are set to use an argument favoured by neo-Nazis to oppose such a clearly necessary definition is truly astonishing.

Instead of adopting the definition, the Tories are reportedly set to appoint two independent advisers to produce their own.

Responding to the Tories’ decision, Sayeeda Warsi, a former Tory Minister who has been lobbying her party for more than 2 years to instigate an internal investigation into Tory Islamophobia, was scathing, telling BuzzFeed News:

Whilst the Muslim Council of Britain said it was “truly astonishing the government thinks it knows better than Muslim communities“, adding:

“If this free speech rationale is true, it would mean that the government believes that defining the racism that targets Muslims or expressions of Muslimness somehow impinges on free speech.”

“Defining anti-semitism does not do so, but defining Islamophobia does. Truly shocking”