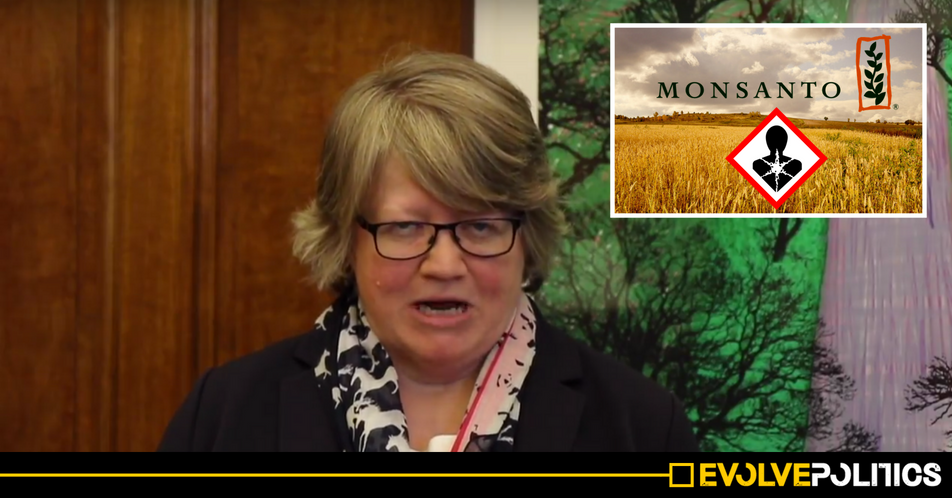 A Tory Environment Minister who has previously been criticised for accepting gifts from huge corporations has elicited yet more anger and ridicule after tweeting a staggeringly ill-timed product endorsement for a controversial chemical just two days after a jury in the US found that it had caused a man’s cancer, and awarded him $289m in compensation.

Therese Coffey, the Conservative Parliamentary Under-Secretary at the Department for Environment, Food and Rural Affairs, tweeted her endorsement of Monsanto’s Roundup weedkiller on 12th August:

Getting ready to deploy the amazing Roundup! pic.twitter.com/i9oUScNK38

However, just two days earlier, a jury in San Fransisco had decided that Monsanto was liable for Dewayne Johnson’s terminal cancer.

Johnson had been a school groundskeeper for several years, and was required to spray Roundup regularly. He subsequently developed non-Hodgkin lymphoma, a cancer of the lymphatic system. He is now terminally ill.

The jury also decided that Monsanto had acted with “malice and oppression” because the company continued to sell the product despite being aware of the risks.

In response to the jury’s verdict, Monsanto said:

Coffey – who has previously worked on the Culture, Media, and Sport (CMS) Committee which was tasked with recommending regulation for the betting industry – came in for fierce criticism in 2016 after it emerged that she had accepted at least £890 in hospitality from one of Britain’s biggest betting firms, Ladbrokes.

Given her past acceptance of gifts from companies linked to her work, Coffey’s latest staggeringly ill-timed endorsement of Roundup has, unsurprisingly, created a significant amount of suspicion:

@theresecoffey
1. You think a black man getting cancer is amusing…or…
2. You are really stupid…or…
3. Your account has been hacked.
Which one is it?

.@theresecoffey Monsanto just paid damages for Roundup causing cancer & you endorse? Do they pay u directly, offer future perks or what?

Are you deliberately taking the piss out of a man whose life has been ruined? Is this a joke?

Are you just angling for a payout? $298 million is a lot of money so I can see why you’re be tempted.

Coffey – who has a PhD in chemistry – subsequently sent another tweet, in which she compared Roundup to household bleach:

Like a lot of chemicals and pesticides, you handle appropriately to manage the risk. Just like you do with bleach and other household chemicals. Roundup is just the same. https://t.co/UJuuSkr23A

In 2015, the World Health Organisation’s cancer agency classified glyphosate, the main ingredient in Roundup, as “probably carcinogenic to humans“.

The following year, a joint report by the WHO and the UN’s Food and Agriculture Organization concluded that “glyphosate is unlikely to pose a carcinogenic risk to humans from exposure through the diet“.

The FAO made it clear, however, that their research related only to dietary exposure and that the situation was “less clear” with occupational exposure.

In 2017, the EU licensed Roundup for a further five years, despite 1.3m EU citizens signing a petition calling for it to be banned. Just days earlier, Greenpeace had accused several members of the EU committee making the recommendation on whether to relicense Roundup of having conflicts of interest because of their links with the chemical industry.

DIY giant Homebase has announced that it will be reviewing the sale of Roundup in the light of the jury’s decision. B&Q is also reviewing its product range.

But whatever your view on Roundup, a Government Minister explicitly endorsing it just days after a jury rules that it has caused a man’s terminal cancer, is both highly dubious, and in extremely poor taste.