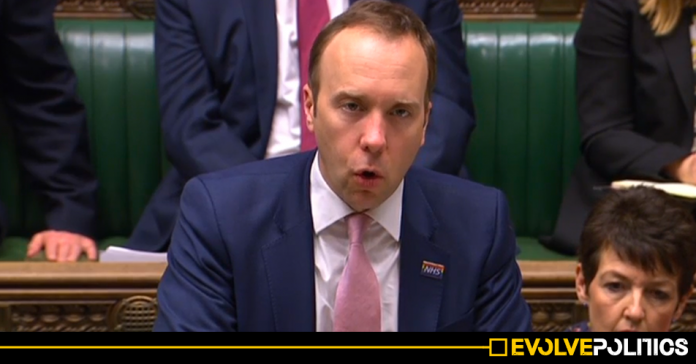 The Conservative Party’s Health Secretary, Matt Hancock, has refused to deny that benefit claimants could face financial sanctions if they are forced to self-isolate due to the current coronavirus outbreak.

Speaking in Parliament, Labour’s shadow Health Secretary, Jonathan Ashworth, asked Hancock numerous questions about the ramifications for both insecure workers and benefit claimants if they are forced to self-isolate due to coronavirus.

“The Prime Minister said today, as indeed the Health Secretary has said before: workers who self-isolate are considered to be on sick leave.

Can he confirm that those who do need to self-isolate will not therefore need to visit a GP to receive a sick note? – because of course the government’s advice is not to present at a GP.”

The Shadow Health Secretary then asked about the government’s policy towards benefit claimants:

“Those who are in receipt of benefits are often asked to physically attend appointments. If they are asked to self-isolate, can he confirm that no financial sanction will be imposed?”

On the subject of workers receiving sick pay for self-isolation, Hancock responded by claiming that:

“[Workers] who do need to self-isolate for medical reasons to protect others – that counts as being off sick. They do not need to go to a GP because there is a 7-day allowance for self-declaration.”

However, Hancock refused to address the question about whether benefit claimants could face sanctions for self-isolating due to coronavirus.

Hancock replies saying that statutory sick pay should apply to anyone who self declares, there's a 7 day grace period for it. Labour benches don't like that at all. Doesn't address points on those in gig economy or those on benefits (who usually have to appear in person).

Later on in the same debate, Hancock was again asked the same question by another Labour MP.

Hancock responded by saying it was the government’s “intention” not to sanction benefit claimants who self-isolate – but refused to make any firm commitment that it would not happen.

The Tory Health Secretary also added that he was speaking to the DWP Secretary “frequently” about the issue.

“Could I ask very specifically around the advice to DWP decision-makers. What advice specifically has been circulated within the DWP, and could all elected members get a copy of it just in case any of our constituents find that that advice has not been followed through?”

Hancock responded by saying he would take the issue up with the DWP Secretary.