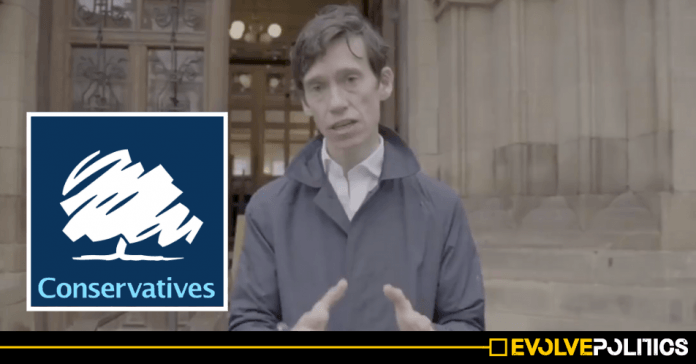 The Conservative Party leadership candidate, Rory Stewart, has promised to introduce a form of “National Service” which would be compulsory for all 16-year-olds, should he be elected Tory leader and then go on to become the Prime Minister.

In a video released on his Twitter page, Stewart proudly announced that “On the day that I take over as Prime Minister, I will launch a National Citizen service.“

Stewart then goes on to explain that his plan would involve all 16-year-olds being forced to spend four weeks “learning skills” and “giving back to the community“.

The potential future Prime Minister claims that his plan would be “a fantastic way of bringing people together” and would instill a “sense of national pride” in youngsters:

If I become Prime Minister I will introduce National Citizen Service – universal – for every young person. Purpose. Character. Coming together across the United Kingdom. pic.twitter.com/rSxxSxnCgr

Unsurprisingly, The Conservative Party MP’s plan to force youngsters into a form of National Service didn’t exactly go down particularly well with many:

You can’t afford a flat, you’re drowning in debt and the planet is burning – so here’s the state forcing you into doing stuff you don’t actually want to help with your “anxiety”. https://t.co/HYaeIIjSbF

Young people have purpose and character. What they lack is support, properly funded services, and generations above them who don't hold them back. This kind of rubbish is EXACTLY why the young are so pissed off.

Why on earth are centrists/centre-right Tories so obsessed with National Service?
Chuka Umunna wants to bring it back too.

Forcing young people to do labour for the state is the OPPOSITE of liberalism. https://t.co/vEKXBmWV55

Young people: “we’ll never get on the housing ladder, scrapping student grants has punished poorer students, tuition fees mean more debt, the NHS is on its knees and we are part of a generation which will be worse off than the last”

Yet *this* is what Rory Stewart prioritises? https://t.co/IlENFqDpkz

A recent poll conducted by YouGov found that Stewart is currently ahead of Boris Johnson as the nation’s favourite to take over as from Theresa May as leader of the Conservative Party.

Extraordinary. New YouGov poll puts ⁦@RoryStewartUK⁩ ahead of ⁦@BorisJohnson⁩ as public’s choice for PM out of all the Tory leadership contenders. pic.twitter.com/voGrgRbiNb

If Stewart does go on to win the Tory leadership race, he would almost certainly go on to become Prime Minister and would then be able to put his National Service proposal before Parliament.