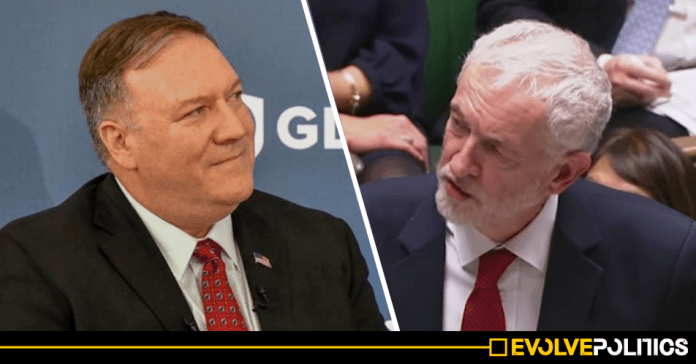 The audio tape, obtained by the Washington Post, reveals details of a behind-closed-doors meeting held between Mr Pompeo and Jewish leaders in the United States.

In the audio, Pompeo can be heard promising to do his “level best” to stop Mr Corbyn – who vehemently supports raising taxes on the rich to fund the renationalisation of public services – ever being elected into 10 Downing Street as Prime Minister of the UK.

Responding to a question about whether he would be willing to work with Jewish leaders to “take on actions” against a potential future Prime Minister Corbyn, Pompeo stated:

“It could be that Mr. Corbyn manages to run the gauntlet and get elected. It’s possible. You should know, we won’t wait for him to do those things to begin to push back. We will do our level best,”

“It’s too risky and too important and too hard once it’s already happened,”

The astonishing details of a high ranking US official admitting he would attempt to influence the British democratic process comes despite outrage – in both Britain and America – at Russia’s reported attempts to influence in the US Presidential elections and the UK’s 2016 Brexit referendum.

Pompeo now says he will do his utmost to stop Jeremy Corbyn becoming Prime Minister. I thought they hated foreign interference in the democratic process?

“President Trump and his officials’ attempts to decide who will be Britain’s next prime minister are an entirely unacceptable interference in the UK’s democracy.

Pompeo’s leaked comments come just days after President Trump declined a meeting with the Labour leader and claimed not to know much about Mr Corbyn:

“He wanted to meet, today or tomorrow, I decided I would not do that.”

“I don’t know Jeremy Corbyn, I’ve never met him, never spoke to him,”

“I think that he is, from where I come from, somewhat of a negative force.”