Today saw the worst mass shooting in recent US history as a lone gunman killed at least 50, and injured 53 at the Pulse nightclub in Orlando, Florida.

The horrific crime has sent shockwaves across the world, with US president Barack Obama calling the shooting ‘heartbreaking’, and vice president Joe Biden offering his ‘prayers and condolences to all the families and loved ones of the victims’.

And as news of the killer’s identity emerged, speculation over his motivation was rife on social media. Many suggested it was religiously motivated, whilst others saw it as a direct hate crime against the LGBT community.

Republican nominee Donald Trump took time out of his schedule to tweet (extremely insensitively) about the event, causing a huge backlash from many twitter users:

Appreciate the congrats for being right on radical Islamic terrorism, I don't want congrats, I want toughness & vigilance. We must be smart!

shut the actual fuck up. People DIED. It's time to mourn. Not radically brag, you insensitive sensationalized asshole.

You are a stain on your children and humanity!!! You are the lowest of the low!!!!!!!

But whilst the arguments and anger raged on, solidarity for the LGBT community was slowly breaking through on social media.

This was Guardian commentator Owen Jones’ immediate response to the tragedy: 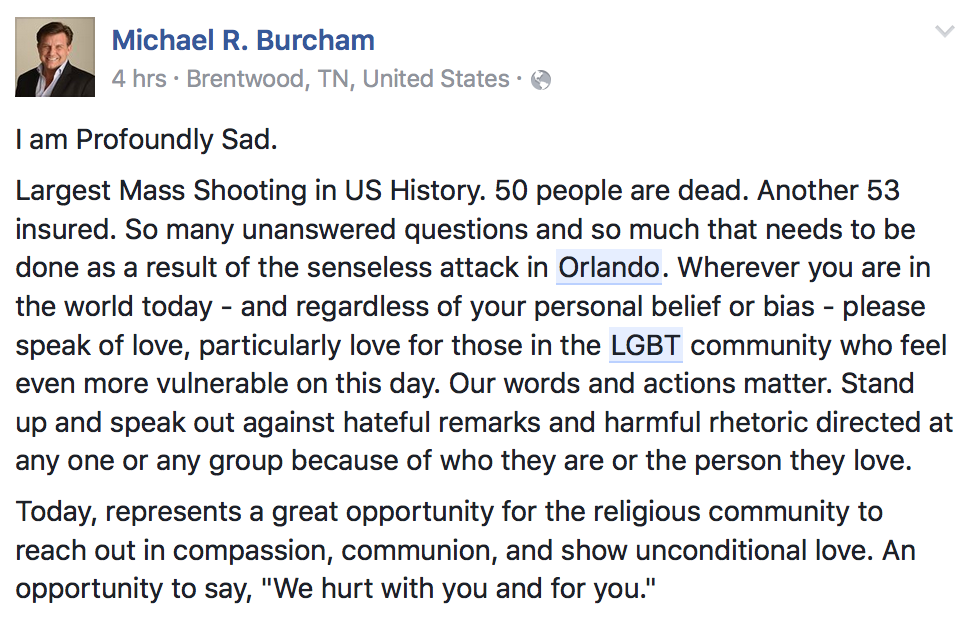 And on Twitter, the hashtag #LoveIsLove is trending at number 2, and has now had over 300k tweets so far today.

On what has been a truly dreadful day for the LGBT community, here are our pick of the most uplifting tweets that give us hope for a more unified future.

Be proud of who we are. #loveislove pic.twitter.com/RDgEox3UOH

Homosexuality exists in 450 species.
Homophobia is found in only one.

they all look so happy with the person that they love. I don't see what the problem is? #LoveIsLove pic.twitter.com/fB7Rp8fxBv

everybody deserves to be loved and to be in love #loveislove pic.twitter.com/wVQKWEH3lt

Love is a beautiful thing, and no one can help who they fall in love with! Always be you, no matter what anyone thinks! #LoveIsLove ❤️