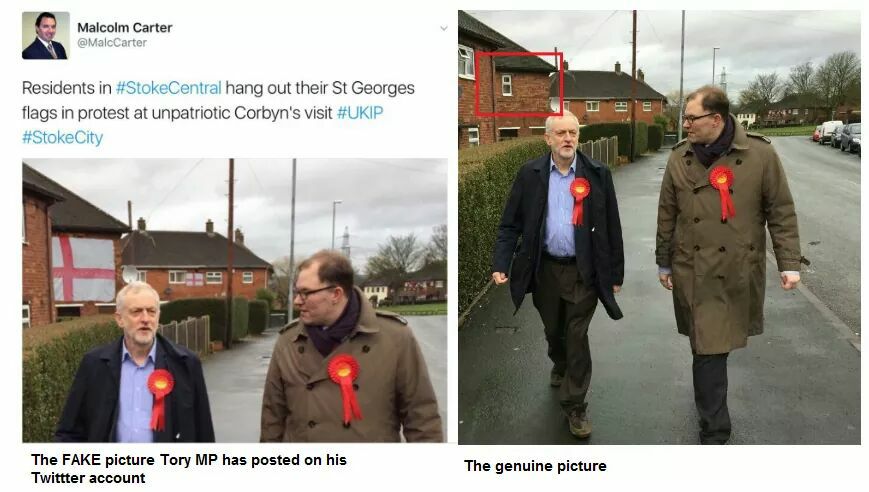 As we enter the home-stretch of the Stoke Central by-election, it’s becoming increasingly obvious that “fake news” is a UK problem too. Malcolm Carter, a UKIP linked campaigner, has taken it upon himself to smear Jeremy Corbyn with the age-old accusation of lack of patriotism.

Mr. Carter, who styles himself as a campaigner against Labour and socialism, shared a photoshopped picture of Jeremy walking in front of houses adorned with England flags. He claims this was a protest by the people of Stoke-on-Trent against the “unpatriotic” Corbyn. The picture has been shared hundreds of times.

In reality the flags were added to a shot released two hours earlier on the Labour Party’s own Twitter account.

A lack of patriotism is a common attack on the Labour leader. He doesn’t bow the required number of degrees, doesn’t kneel enough in front of the queen and didn’t shout Brexit means Brexit the requisite number of times. That Corbyn believes more in the strength of working British people than other politicians is seemingly ignored.

This isn’t Mr. Carter’s first attempt at trolling Labour, either. He’s previously made a libellous claim against Labour candidate Gareth Snell, that Mr. Snell bought a house from council stock. His claim, that Snell had personally made £40,000 on the deal, was contradicted by the Labour press office, who pointed out that Snell had bought the house from an unnamed elderly lady, and that the house had never been council stock. More worryingly, in the process he revealed Mr. Snell’s address publicly on his Twitter account. Whilst for a parliamentary candidate it is usual to expect a reduced degree of privacy, it is perhaps less reasonable to expect your address to be shared with 4000 hard-right UKIP and Tory supporters. In a tense political atmosphere it must be very unnerving for Gareth Snell.

Perhaps the housing smear is due to anxiety over Paul Nuttall’s own housing worries. A Channel 4 investigation recently discovered that he had likely faked his address on his nomination form, a crime punishable with fines, jail time and a ban from holding office. Perhaps Malcolm Carter might photoshop Mr. Nuttall into the house he admits to never having been to?

Mr. Carter himself seem to have a very unpleasant online presence. His Twitter feed is peppered with tweets and quotes from such illustrious figures as Marine Le Pen, Geert Wilder and, of course, Donald Trump. He’s also shared a number of Islamophobic posts.

If what Martin Amis said is true, and you can judge a man by his enemies, then Corbyn is doing a better job than I realised.