Home UK News Economy This viral pro-Tory graphic is complete and utter bullsh*t. Are you really... 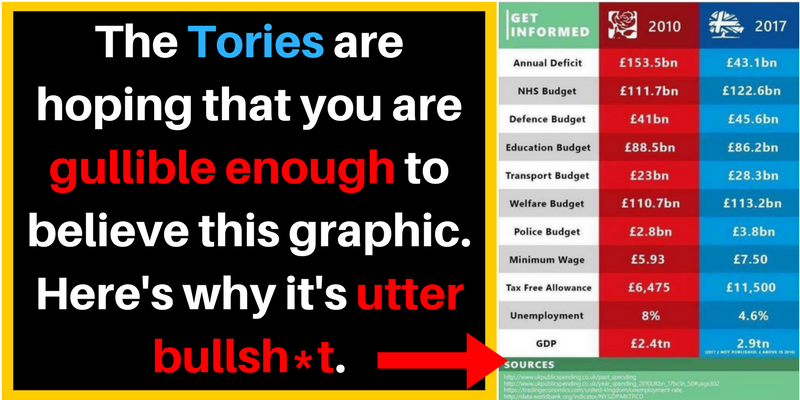 There’s a handy little graphic floating around social media at the moment, pushed out by the Conservatives as part of their traditional claim of ownership of economic acumen as compared to Labour’s record.

As usual with these sorts of infographics, the figures themselves can’t be taken on face value.

The column headings for example give just two years being compared: 2010 and 2017.  With no specific dates it’s hard to confirm the veracity.

These dates are significant, not just because 2010 was the last time that Labour was in power, but also because of its proximity to one of the most seismic economic disasters in modern history.

But let’s not allow pertinent details to get in the way of making a cheap point.

Given the 7 year span these figures cover, the creator of the graphic has decided to conveniently forget to adjust for inflation, as well as also ignoring other crucial factors such as a rising population.

Adjusting for inflation is also know as a ‘real terms’ comparison, and is the only way of accurately comparing financial figures over any span of time.

However, the creator of the graphic has decided to compare these figures without adjustment because they are trying to push a political message – ultimately assuming that the British public are stupid enough to fall for it.

On welfare the claim is that Labour spent less than the Tories – however, those on the right traditionally see lower welfare spending as a good thing.

But again the increases under the coalition and Tory administrations are most likely a factor of population growth.  Even after the imposition of benefit sanctions, the bedroom tax and cuts to disability benefits, the fact that this figure is still rising would suggest that none of these iniquitous measures are having any real impact on their welfare budget.

The NHS figures would also have to be adjusted for rises in population, particularly the elderly, who are far more likely to impact on spending as is the accepted long-term trend as we all continue to live longer.

There is also much to debate over Conservative claims on NHS spending as so many of their figures on healthcare are mired in obfuscation and creative accountancy.

In bald terms the increases shown don’t even come close to keeping pace with the investment that most health experts and pressure groups have shown is required.  So perhaps they’d better reel their necks in on that one.

Comparison of the minimum wage is pretty spurious, considering that the underlying principle is that this will continue to rise annually anyway.  The Tories can hardly lay claim to that as a unique positive in their favour, especially as Labour introduced the minimum wage in the first place.

Comparing tax allowances with a 7 year gap between administrations is a pointless exercise in itself.  Such decisions are largely politically motivated, and in the case of the Conservatives, driven by their desire to seem like the party of low taxation.

However, if you factor in the increase in VAT, National Insurance, low wage growth and inflation, there’s a good case for saying people are much worse off now in real terms.  That’s certainly borne out by the findings of many social surveys and analyses in recent years.

On unemployment we’d have to exclude elements such as the gig economy, unpaid internships and many of the other ways that this statistic can now be skewed.

Unemployment numbers are notoriously open to finagling, but with a reasonably buoyant economy I’d be prepared to concede that there are less people genuinely unemployed now that there were in 2010.

With many being forced to hold down multiple jobs just to stay afloat (as recognised by Theresa May in her ‘just about managing’ speech), I’d question if measures of employment levels now gives much meaningful information as to the health of our economy or the social health of our communities.

GDP and The Deficit

That leaves us with the figures for GDP and the deficit.  The GDP figures shown here are intriguing.  I’ve spent some time online looking for any figures that come close to those being quoted.

The closest I can find to these are quoted in dollars, which begs the question: did the person compiling this table not realise that the figures were in USD before quoting them in sterling?  If so I think that may speak volumes in itself for how safe our economy is in Tory hands.  Let’s hope they don’t make the same errors when paying their House of Commons Champagne bills.

Even then the figure shown for 2017 is incorrect, as full year stats for 2017 won’t be available until early next year.   Admittedly it does concede that in yet more very tiny and easy to miss small print.  Looking at a graph of current GDP growth does show that it leveled out in 2015, fell in 2016 and looks set to do the same in 2017.  It’s been widely reported that the economy had already started to slow prior to the general election being called.  Some might even argue that this was part of the PM’s motivation.  Whatever the case, predictions of GDP levels in six months time would be very unwise at this point in our history.

The deficit figures being quoted do seem to be broadly correct.  As with many economic terms, there are different definitions for ‘deficit’ but here they seem to be referring to public sector borrowing which actually stood at around £152bn in 2010 and has now fallen to something like £49bn.  Notably the numbers in the Conservative column are somewhat lower than the more accurate statistic in Labour’s.

But this really does need to be put into historical context.  Prior to the crash the deficit under Labour stood at a modest £20bn or so, but 2010 saw borrowing climb as a result of money being poured into the economy (notably the banks) simply to prevent total meltdown.

Whilst I’ll entertain that Labour bore some of the blame for the economic liberalism that led to the credit crunch, it’s laughable to suggest that, had the Conservatives been in power, they’d have done anything different.  Labour were simply in the driving seat when we, and the rest of the neoliberal world, hit the brick wall.

Where are the National Debt Figures?

One might easily hazard a guess as to why it’s absent, and I think it would be safe to say it’s because it doesn’t look quite so good for the Conservatives.

The usual Tory trick is to allow the common confusion between debt and deficit to remain.  Whilst the latter refers to the gap between money coming in and money going out, which has been reduced largely by cutting spending to the bone on anything the Tories regard as superfluous, such as welfare, education and the NHS.

As we’ve seen recently, even traditionally sacred areas of spending have now fallen under the chancellor’s axe, such as defence and police numbers.  Reducing the deficit in this way is a pretty down and dirty strategy.  It’s the equivalent of not eating so you can afford to pay down the mortgage, rather than getting a better job with higher pay.

In the case of the national economy, the Conservatives have pursued a policy of austerity in an attempt to balance the books, rather than properly stimulating other areas such as manufacturing and infrastructure to bring more money in.  They’ve also allowed huge amounts of personal consumer debt to amass on individual credit cards, bank loans and mortgages.  It all sounds very similar to what led us into trouble last time.

The national debt has been nearly doubled since 2010, from £960 billion to a whopping £1.73 trillion in 2017 and let’s not forget that the figure in 2010 was in itself inflated by the crash in 2008.  Prior to that it stood at a much more modest £500m in 2005.  In those terms we can thank the Tory fiscal fortitude for more than tripling the amount that will be owed by several generations to come.

George Osborne famously predicted a budget surplus by 2020, a ludicrous ambition that has long since been abandoned.  Historically we’ve only run a surplus for around 7 years in the last 40 and with interest on our debt running at around £43bn a year, you don’t need to be an economist to see how unlikely it is that we’ll ever see the debt reduced in several lifetimes.

If you factor in the Tories’ plans for a hard Brexit and the economic impact that has been predicted by many experts, it’s likely that the debt will continue to balloon well beyond the 89% of GDP it stood at in 2015.

These are the real numbers that count, especially when we add in consumer debt and pension liabilities which takes the total owed to well over £4tn.

Perhaps next time the Conservatives design a handy cut-out and keep comparison chart they might like to ensure they don’t cut out the most relevant bits of the national equation.

But then again I suppose when you’re looking to design a fiscal package that could conveniently fit on the back of a fag packet, it’s easy to let those bits that make you look bad fall off the edge.